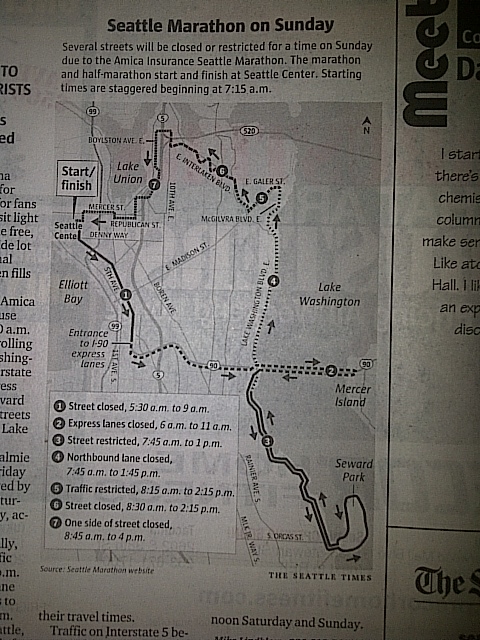 I don't know what my Garmin says yet on my mile times. I have not uploaded t yet. I couldn't get it to get a satellite signal for about the first mile. There were some spotty spots where there was no connection, like the freeway tunnels, and I forgot to turn it off about an hour after finishing.

I will not wear my  Nike running jacket in the rain next time like this because it held moisture the whole time and it was pretty heavy and soggy by mile 7. I wore it only because it had pockets for my stuff- cell phone, ipod, gloves (which I didn't need), chapstick and kleenex) I wore a throwaway rain poncho thingie and I tossed it at mile 23, when the rain let up for a few minutes. It helped block the rain from my cell phone and ipod. I wore the Newtons and felt ok in them. They were completely wet and miserably soggy by the 1st half and even though I don't have blisters (YAY!) I think the way my sock was rubbing on one of my toe nails was either pulling off my toe nail or I was starting to get a small blister under the nail. My foot was not happy after the run. It is so much better now on Monday.

I thought a few times how much fun the rain would be if I didn't have to worry about my ipod getting wet or ruining a cell phone. But then I would have had more time to worry about wet feet and the damage it would be causing.

There were less then 200 people who started walking. I am glad I did because if I would have started with the runners, I would not have had soup and bagels and such at the end. They put things away a little after I finished. After my post-race massage, which was about a half hour after I finished, there was nothing left except some bananas, bagels, water, and fruit cups of pineapple - leftovers on a table. I feel sad for those who finished later then I did. There would have been nothing for them.

Before the race, I made friends with a photographer, who got my pic at the end of the race. He called me his "shimmer princess" because I was wearing a blue Sparkle Skirt. Hopefully I will get to see how those soggy pics turned out very soon. He made me very happy because he was so friendly- and he liked the skirt.

I started the morning out with a tummy ache. Heaving and all. Not sure why. Couldn't even really eat anything for breakfast. I did have some Hammer Endurolytes and a Hammer Bar. I was only on 4 hours of sleep-couldn't get back to sleep after 2am! So that may have been why I didn't feel good. No sleep and all. I started the marathon queasy. I walked until mile 6. I found 2 pennies on the ground in the 1st mile. I figured that it was good luck, and like the city of seattle just sponsored me to run -I'm cheap to sponsor, ya'll! - lol, so I made sure those pennies were in my pocket.The full marathon runners caught up to the walkers at mile 6 so I started jogging so I didn't get ran over. I jogged for at least 6 more miles and that is where my feet were uncomfortably wet and my toe was distracting me. I felt the squish of all the water in my shoe. I was worried that I was going to get foot rot from 6 hours of wet feet and I was hoping the rain would stop sometime soon. I felt like I had the energy to keep going, not out of breath, and even able to zone out a few times. I was able to stay at a steady pace. There was a girl who, I think, started out as a walker with me, and she would run/walk. She passed me, I passed her. I felt like she was my running buddy for a couple of miles here. I did eventually stay in front of her about mile 14 and I never noticed her pass me again. My legs felt good until about mile 16. My quads were getting sore and my right knee was achy. My feet were sliding around in my shoes. I was worried that all that nice cushion my shoes had, was now ruined. I lift up my arms to drink water and I could feel all the water slosh around in my sleeve. Running up and down my arm when I moved it like I had a plastic water filled baggy on my arm. Around this time the hills were getting a little more constant. Around mile 17 there was a restaurant with their doors open cooking BACON! Not even able to eat any of it. It was torture! That smell. Ugh. Bacon has electrolytes too. I would rather have bacon at the water stations then gatorade. MMmmm. Bacon. Anyways, I alternated walking and my slogging until mile 23. I didn't care about the time on the clock. It was already 4-5hours so killing myself the last few miles was only going the help a few seconds- or even a few minutes, so I did what was comfortable. The hills were steep and wet. I didn't look around at the pretty land around me. I kept my head down to keep the water running off the bill of my hat. I threw away my poncho and I put my ipod on after mile 23, which I should have done sooner, and my Seattle playlist I made was the perfect boost to give me energy. Kid Sister's Right Hand Hi was the first song on shuffle and I was able to pass people as I slogged a little faster. I had to walk on the downhills that were leading to the Space Needle and into Seattle Center. I found another penny on the start of the last mile. It hurt really bad to stop and pick it up, but I ran (ha, slogged, I mean) with that penny in my hand to the finish line.

I drank water at all of the water stops. I walked through all the water stops because I can't drink and run. I had water and lemon-lime gatorade and one stop. I had 1 hammer vanilla gel at like, mile 5 or where ever the Mercer Island turnaround water stop was. (I brought 6 hammer gels with me and a 6 tab pack of caffe latte perpetuims, which I didn't take) I had like 5 vanilla GU's that were available at the water stops with my last GU at mile 23 or so. I grabbed the GU because they were easier to grab then fishing my Hammer Gels out of my Race-Lite Go. With the poncho and the rain, seriously it was a hassle this day, when it never has been before. The GU's didn't bother my stomach as much as they have before in training runs, but maybe because I was preoccupied with thinking about how wet I was.

I thought all of the course volunteers were great. Including the Seattle police making sure we were safe. I thought at one water stop, one volunteer was overwhelmed with handing out water so I had to find a water cup of my own. I think it was rain water because it tasted like the plywood it was sitting under.


Today, I feel good. A little bit of muscle soreness. A knot (which hurts the most out of everywhere on me - it's bad) in my shoulder that is making my left shoulder higher then my right, sore glutes, my knees feel a little swollen, my calves feel used, my abs and biceps even hurt, crap- everything feels like it has been worked. But I feel pretty good. Maybe a bit dehydrated. Hyper but tired. Wanting to lay down but not able to stop moving around.

I am a little upset at my insensitive BF who asked today after he picked me up at the airport if there were other overweight people like me in the race. He did ask me yesterday after I finished if I lost a pound. I think my BF if a jerk that hates my weight. Sigh. He is just jealous that I have accomplished something other then sitting at home all the time.