December 21, 2011
One year ago, I decided to run a marathon, along with completing 2 other running races. This was my New Years Resolution 2011. My fat butt has never been athletic. Ever. But for some strange reason, I was one of the first people of the year to sign up for the 2011 Seattle Marathon.

I chose Seattle because I have friends up there I can visit, and it was one of the furthest away in the calendar year to train for. Which to me, meant 10 months of training - from ZERO to 26.2 miles! 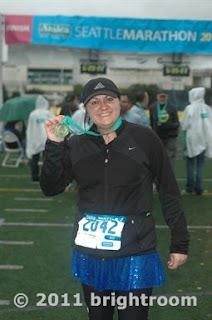 It took me a few weeks, or was it months(?!?!), to tell the BF that I was going to do this. I know he would have thought I was a total nutzo. I told him and he thinks that I am cray-cray - still when I sign up for more races. I still have not told the BF about Sogonapmit.

I halfheartedly slogged a few miles every week at the start of 2011, until I got around to signing up for the Runners World free Smart Coach. It did help me get a running plan for free and it helped me get through my marathon, but my own laziness is something that holds me back. Like not adding enough regular crosstraining - especially when my long runs started to get long - like 6-10 miles. And even at the end of the year, I took my rest days a little too serious. I have a fear of being injured and not being able to go to work or to perform my physical job.

I didn't lose any weight other then 6 pounds near the end of the year. I take my nutrition just as serious as my rest days. I gained 2 of those pounds back within this month. Thanks post-marathon recovery.

I don't know if it is the running itself, or saying that "I did this!" when there are others who think that it is impossible, or just knowing that there is a community of crazies out there that like to run too, but something is keeping me going into the SECOND year of running. 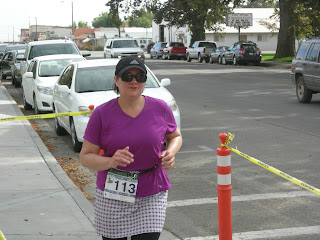 I have goals for 2012, but not like my other goals of years past where I write down a bucket list of sorts. I think the year I met my BF I had down a whole bunch of things like, learning another language (Japanese), taking singing lessons, and starting a girl band with my BFF at the time. I wanted our band to sound like CocoRosie. Yeah, the CocoRosie band thing didn't work out.

In 2012, I will be making some fitness improvements as my resolution. I need to lose weight so I can increase my speed and set what people call PR's. (I don't know what a PR is - yet. I have yet to set one.lol) I may enlist the help of a running coach/trainer, but have not found the perfect person in Boise to help me out - yet. One coach I am looking at is $400 for 2 months of training minimum. My bank account says OUCH!


There are other things that I would like to accomplish in 2012, but the weight and the speed issue are the biggest deals for me. If I can get down 2-3 pant sizes, or down 30 pounds OR MORE, I would be cool with that. 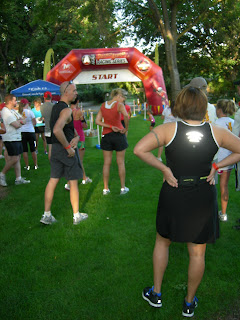 I am ready to start this new year and start to tackle my challenges NOW!

Here's to another year of healthy running and to achieving our highest goals!