March 23, 2012
I have been slacking on going to the grocery store for a few weeks. We have been out of milk since Monday, almost out of butter, no salad fixings other then 2 huge artichokes, red bell pepper , spinach, and I have a half cup of sugar left. I have been going through the kitchen trying to use up whatever I can to prevent going to the store. But I will have to go to get sugar tomorrow. I need it for my coffee.

All this is because I was inspired by The Bitten Word & their kitchen cleanout.

Thankfully, I had everything I need to make pizza.

I love pizza. No really, I LOVE pizza. So I made a BBQ Chicken Pizza this afternoon. The BF says that it sounds gross & BBQ sauce doesn't belong on pizza. 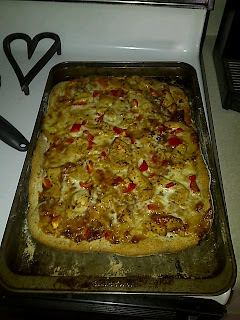 I say he is wrong.

I mean, he IS from California where there is the CPK and he HAS been there. So he SHOULD know you can really put anything on pizza.

I just made a dough but added ground flax in place for part of the flour.  Smeared a bit of BBQ sauce, although I could have used more, thinly sliced some mozz and placed on top. I sliced & cooked chicken breast in a pan & then placed on top. Sprinkled chopped up red bell pepper and then threw in the oven.

Then I nommed. The plate below is a small salad plate. Not a dinner plate. 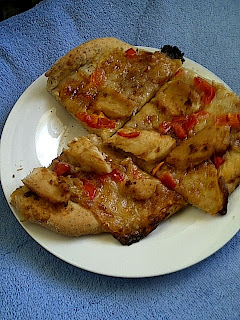 The BF got a so-called stir fry with the rest of the chicken that I cooked & some leftover rice in the fridge. He somehow didn't complain when he scarfed it down. 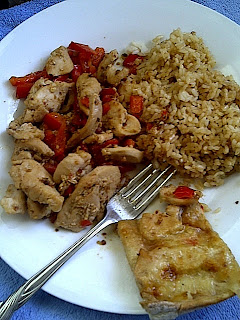 He did say that if I was served that pizza at a restaurant, would I eat it? Prolly not but it tasted perfectly fine.

On another note, I found this pic yesterday - after I entered into a contest to get a free entry into an ultra next month. 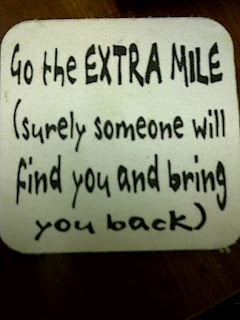 Hopefully the BF will bring me back because I already said he is going to be my crew. He hopes I don't get the free entry because he doesn't want to crew.

Crossing fingers, toes, legs, eyes in hopes I get the free entry.

Are there any races coming up that you want to enter?