Things That Make Me Go Grrrrr

May 08, 2012
Yesterday I slogged around the greenbelt about 2 miles around 12:30 pace and walked almost 1 mile around Albertsons Park around 17 mile pace.

And all the greenbelt flooding is bad. Bad as in bad for erosion of the banks, and other users that want to use the greenbelt from one end to the other without detours and getting wet. I would love to show all these numbers to you but I guess I reset/deleted my Garmin history before I uploaded both sessions today. How does some simple little device get to be so dang complicated. Why even wear the watch at all?

Another Grrr. The USPS. I sent a pair of shoes back to Brooks (which is near Seattle) 3 weeks ago. Estimated delivery date was April 23rd. Somehow the shoes got shipped to Georgia (from Boise), and have not been seen since April 22nd in Nashville. So, either this is now how efficient the post office is, and/or some scumbag in TN just took my $100 pair of New & Unworn Pure Grits. This is more then a grrr. It is more like a Fuuuuuuh!!!!!

Anyways, I did learn on my slog today, from overhearing some nerd playing golf, how jet trails are formed in the sky.

And that Albertsons Park is not as pretty as it usually is, the shady sit area near the front, the roof collapsed (someone has to be saying Grrr about that) and it has a lot of geese, but not as many as there was last spring. 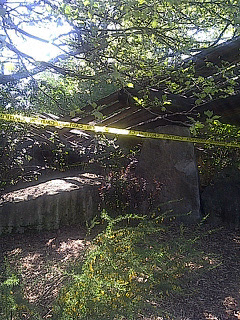 What was your workout today? Do you like eating duck/goose/rabbit/squirrel/something other then cow, pig, chicken, fish?