I Did A Hard Guy

July 23, 2012
Today, I told the BF I wanted to get up early Sunday morning and hit the Hard Guy trail. Just the name alone has scared us all year long. The Hard Guy. It just sounds daunting. 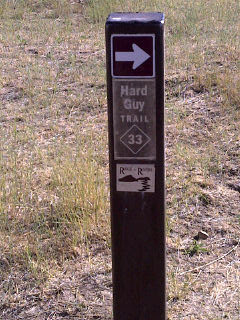 We did complete the trail. The BF said that this was one of his top 3 most miserable experience ever. lol!

It was pretty sucky, but not top 3 for me. He has never done anything that far willingly. Almost 13 miles! I am proud of him. 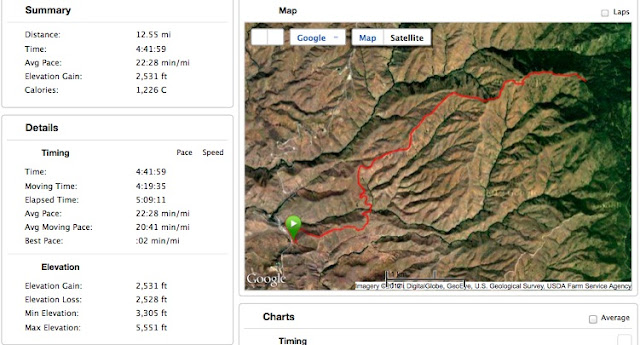 The day started out ok. Started up on the trail at 9am. Breakfast of eggs, toast, and coffee. I also had some water and a Nuun. The BF for some reason didn't want to carry a pack so he could take more water, and just carried one of my blue Nuun bottles of water. I had 2 icy 32oz. Naglene bottles in the car for after the trek - since I knew more water was going to be needed. I brought snacks (trail mix - raisins, peanuts, yogurt & chocolate covered raisins & peanuts) and some gels, pb, and a bunch of my other standard crap in my Camelbak. Well, things started out ok on the trail. Not too hot out, nice breeze the whole way, awesome scenery - the Hard Guy wasn't too hard! I thought it was going to be straight up death hike, but it was more gentle on the elevation.

Lots of grasshopper and crickets or whatever they were. It was like popcorn jumping out at us. We had to stop a few times & rest because the BF was in Tevas (about as smart as bringing just a small bottle of water, but oh well.) and he was not used to doing so many miles. I think we had to stop about 4 times in 6 miles. We had some trail mix on each of the stops. Only one other person on foot and lots of mountain bikers. Heat wasn't too bad the higher we got up. My inaccurate Garmin says we climbed about 2500 feet up and down. 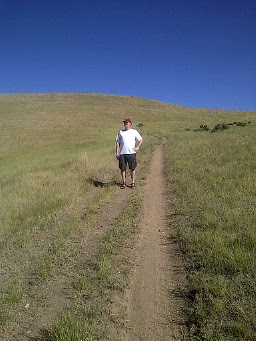 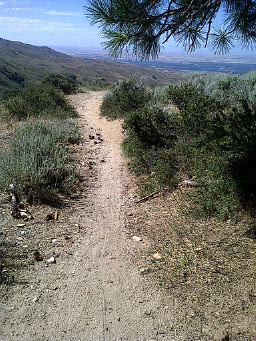 We were feeling good, until the BF finished off his water around mile 5. I have a Camelbak, 70oz is enough to share. Ah, yeah, it really isn't. I don't know if I had a leak, which I think I did because when I filled it up and set it on the counter before we left, I had a big wet mess I had to wipe up. But I ran out about mile 7 or so. Can I say that we bonked hard. I mean the BF really hit the wall much harder then I did. I mean hard.

I had to deal with not only me out of water, which is ok. I know I can do a few miles without a drink of water because I have done it in training when I have forgotten a water bottle. But I have a drama queen as a BF who was getting dizzy, slowing down even slower (13 miles took him/us 5 hours - grumble) and talking about the vultures that will be circling him if he stops for too long. Even though we both know it is the bears, cougars, and wolves that you have to worry about if you are stranded alone in the wilderness. 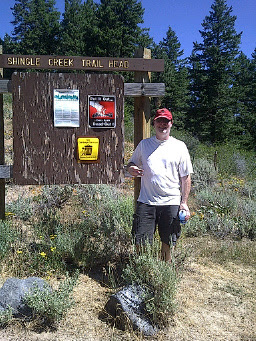 Despite being, um, uncomfortable because of the lack of water, the trail really wasn't too bad to climb. It was super scenic, and really quiet. I didn't notice any critters that scared me. I know there were snakes and stuff around in the hill, but really, nothing was out when we were out and about. One big hawk went out for lunch and was circling around, and a few other birds near Corrals, but a really nice trail. 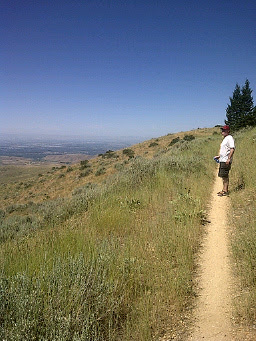 That last half mile to the car, however, was a beyatch. And my bottles were still icy, with cold water. Those babies got pounded quick.

My drama queen was toast. Sun-burnt. Tired. He took 2 showers since he was so caked with dirt. He even asked me if I had some special recovery stuff. He calls all that stuff Frankenfood and avoids it, so I was actually surprised and happy he wanted some. He pounded some of my Endurox R4 and put on my Pro Compression socks and took a nap. 3 of my favorite things post-slog. I wasn't so lucky to get a nap. After I cleaned up, I had to go give a massage to one of my long time clients, then get dinner.

He got to eat 2 Los Betos burritos for recovery. I wish I could have inhaled 2 freakin burritos, but I don't have a man metabolism.

The rest of the night I had to listen to him say that he almost died. I just told him he sucked it up and dug deep to make it to the end. I should have done a vlog of him going on and on about how he almost died and how his legs didn't want to work and how the last couple of miles to the car really sucked. He is very dramatic. I was tired and bonked, but not as hard or dramatic as he did.

Have you ever hit the wall hard? What is the longest in a workout that you will go without water? I think I have done a few 6 milers without water. What are your favorite things for recovery? What was your workout this weekend?