What what? I PR'ed today. By 3 minutes! Seriously, pretty freaking awesome. I wanted to PR on this race, but after my craptastic week (I am done with my pity party and being sad, but not done with my anger) I was not sure how I was going to do on this race.

I tried going to bed around 11:30pm, but I know I didn't get to sleep until after 12:40. 7am wake up. I actually had race day nerves. I thought that was weird because this was my 12th race of the year. My last few races were half marathons, so either I have done enough of those to be completely comfortable with that distance this year, or because I really had no clue as to how this race would have turned out. Eh, who knows.

Coffee, potty, shower, no combing my hair, no breakfast, a Nuun for the car ride, and a Premier Protein shake that I only had a few sips of in the car. I got my bib & chip (no line!), but forgot my shirt (which I got before the start), before I headed back to the car to get warm. It was only like 20 degrees out. I could have stayed in the car a little longer but I got out at 9 and did a few pics and my cold warm up an hour before the start. 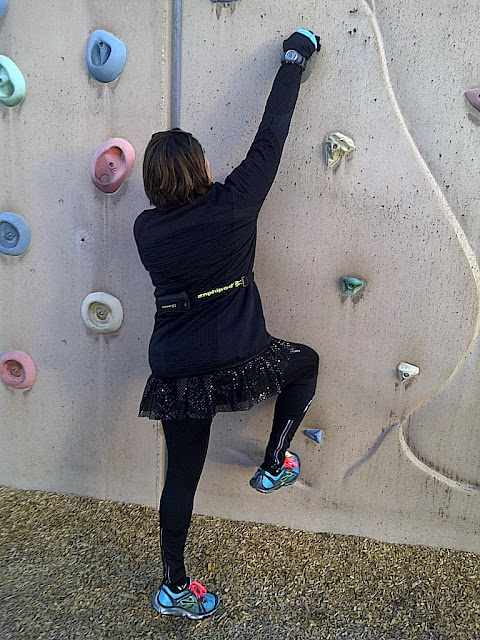 I attempted to climb the rock wall, but it was frosty and my gloves kept slipping. This was all I could do. My hands kinda hurt because they were cold and couldn't grip, but I tried! 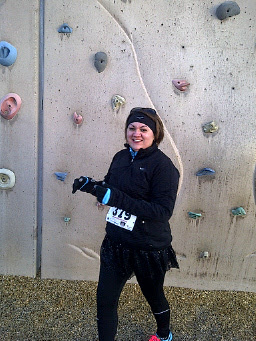 I trotted maybe a quarter of a mile before the kids started their half mile race. I kept warm by doing high knees and jumping in place. My body was warm, but thighs/face/feet were so freaking cold.


I am to the right of Superman, behind the red flag.

So the race started 2-3 minutes late. No biggie. I thought that I started in a good place in the pack, where I only had to pass a few people. There were a few bottle necks where some people had to stop and walk or tread lighter because of the snow on the dirt path. I did feel that if it was warmer, I could have went faster but overall, I am happy with the race. I tried to keep all my times in the 9:XX range. A little closer to 9 then 10. I only glanced at my watch a few times just to check my pace. My Garmie must be off because I look at my time graph and it shows a couple of spots at 0:00 time. But either way, its cool. It's the official chip time that counts. ;-)

My feet were so cold. My hands, which had those small stretchy gloves on them, became warm and sweaty, so the gloves came off during the 2nd mile and I held them in my hand the whole time. My zippered top had to be unzipped. I did get warm. But my feet, numb from cold. I think that is one thing that mentally held me back from being just a smidge faster.

Near the middle of the 2nd mile or so, one lady right in front of me dropped something, her glove? IDK what, but she stopped right where she was to pick it up. Of course I plowed right into her. I don't think I knocked her over or anything. That was actually the worst part of the race, maybe a little more worse for her then me. I mean, we were all doing 9:XX and I am not light or graceful at any pace. The path was really only 4 people wide total, with 2-way traffic and I had someone right next to me. She was in front of me and there were 2 people side by side in front of her. Sorry lady. Didn't mean to plow into you. But you did drop down and stop in front of me.

A random thought that I had about this race. I don't think I was really panting/breathing really super hard. I mean, maybe I was, but really didn't notice it as much as others breathing. I got a workout for sure, but I noticed some people breathing really super heavily where it was like asthma-attack-I'm concerned for you, breathing. My last 5K, was a whole lot worse for my breathing noise then this one. Oh, well. Just a random thought.

When I spotted the finish line from the path, I did glance at the garmie to check the time. It was 10:24am or something like that. That is when I knew I was going to PR.

Anyways, lackluster finish. No last minute people passing. Just an easy cruise to the finish line. My chip time was 26:32.

But I did eat a very nom-worthy brownie and chocolate chip cookies! I really love the mugs we got! 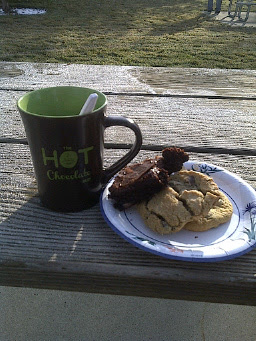 Anyways, I have to somehow go back outside and finish my long run scheduled for this weekend.

How was your week? Any fun workouts? Sweet treats consumed?