December 30, 2013
I hope your holiday week(s) has been well! Sorry for the week of holiday bloggie neglect, and lack of holiday well wishes. I do have drafts of posts ready to go, but not ready to hit send... My new internet modem kicked the bucket on me (I got a replacement one today!) and Christmas was spent in a little town in the middle of nowhere in Idaho sans internet. The new boys father passed earlier in the month, so we went to spend time with his mother and take care of parts of the house she can't do on her own.

During my time away, I made the boy play holiday dress up.

While I shed tears that I picked a CZ to use as my holiday dress up attire. I'm offended that it was a CZ. Offended!

We got back in time for me to work Friday evening, and after that, I spent some time lifting weights. I think I may have done a little too much of said lifting...

The Hot Chocolate 5k was Saturday. (I did this race last year, read my 2012 recap here) There were multiple start times. I picked the 1pm start because I have been playing the cold weather wuss card for the last 2 months and I hoped the 1pm start time would be warmer then the 9am. - duh, it was.


When I woke, I tired and sluggish. Like, I didn't get enough sleep. - i did. But I think it was from lifting after work the night before. I was really working my upper back and arms (my weakest body parts.) I wanted lots of go-go juice, AKA-coffee the morning of, but even at a 1pm start time, and because of turn of events, only had time for my one cup as soon as I woke up.

The race started on time, despite me being sluggish and all. Right from the start,  I already appreciated the new route change over last years race. The start started on the road instead of the narrow greenbelt path by the river. Plenty of time to spread out and break away from the pack! I passed a couple of walkers who started out front and made it to the front of the pack - What, what!? Oh, yes, I did! I started out, of course, too fast for my lack of training but was in 3rd female place,.
I got passed by one other female soon after. Either I would catch her, or I wouldn't. I was still gonna place! 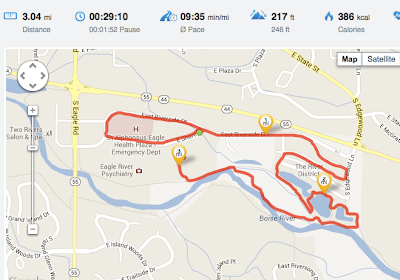 Actually... I wanted to get out in front as fast as I could because we were warned that there was ice on the last mile. I knew that I slow my roll on snow and ice, so I wanted to make sure I didn't slip and fall and ruin the rest of my 2014 running year. 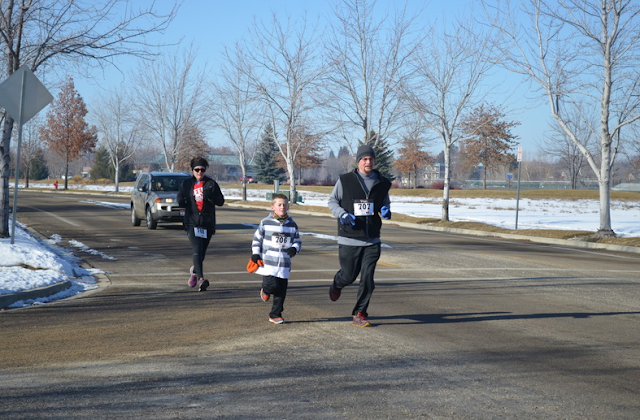 Clear section of road on the first half. 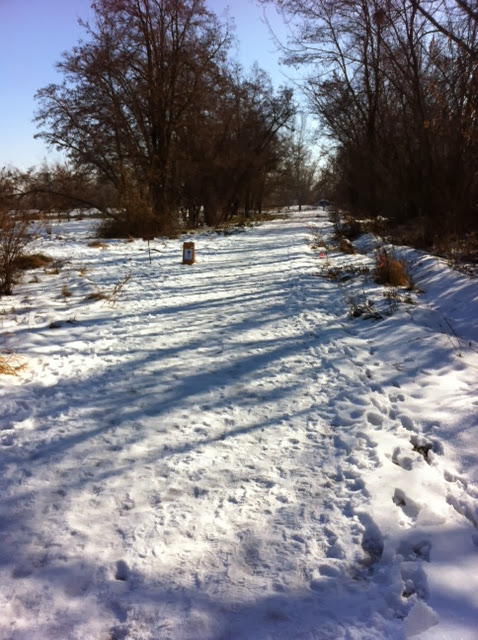 Not clear section of road on the back half. Packed ice and frozen snow.

I sweating and panting on the first half. I looked at my time and 1.41 miles felt a whole lot longer then it was. - it wasn't. I was really working it. I was sweaty and breathing hard. I felt like a noob for wearing that black jacket, but I always feel like in this weather I wear too much or not enough no matter the cold temps. But then the not so clear path happened and I got passed by someone. He was just cruising along and I checked my speed. I think I went from 8min/mi to 12min/mi. I had caught my breath and zoned out. I was enjoying my run a little too much. I dropped my A-game for a minute or 3 and got passed. Oh well. I hit the finish line to cheers of "Yay, Team Beef!" 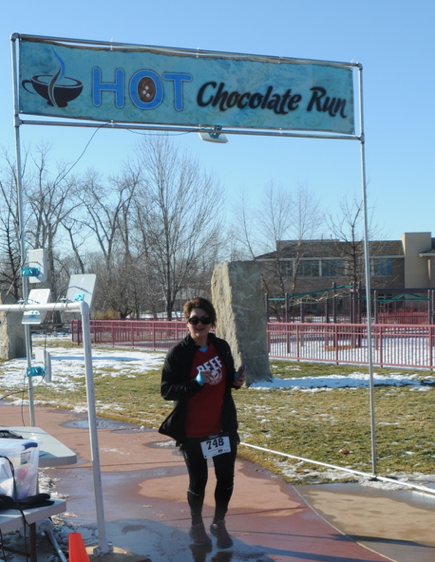 Finisher mugs of hot chocolate and sweets were waiting for me.

Guess who said she was gonna place?

Girlfriend got 4th female, 9th overall, and 1st in her AG. I really was woot-wooting. The boy doesn't know how to use and iPhone and I was getting annoyed.

I think my form during running was really janky because my right shoulder felt like I strained it lifting, although nothing hurt before the race. Just a bit after the finish my whole shoulder was screaming at me.

How was your holiday? Did you run/race? Have a nice time with friends and family?
Santa treat you well?