June 03, 2014
I recently took a slight road trip that "just happened" to coincide with errands that the boy had to do in the Magic Valley area.

Since I am on the 5K bandwagon, I signed up for the Spirit of Magic Valley 5K.

You know, it wasn't that bad of a race. I have some issues with the people of Twin Falls being a little more, well, laid back. I sat behind a car at a stop sign for waaaay longer then I should have because someone couldn't or refused or didn't know how to turn left onto a busy main road because of whatever reason. I got me some road rage. (we won't go into any more details here about what I did to resolve the situation) With the laid back 'tude of the residents, I figured the racers would be too.

Packet pick up was the Friday before race morning where the start would be. I got there early and there wasn't many people waiting. Of course while waiting, I had lady cut in line before me. There wasn't anyone behind me. I wasn't too close behind the person picking up their bib, but I wasn't that far away either. I glared at her and called her an F'n B. in my head. Sorry. But I had some race anxiety going on. I didn't need to be dealing with anything else. 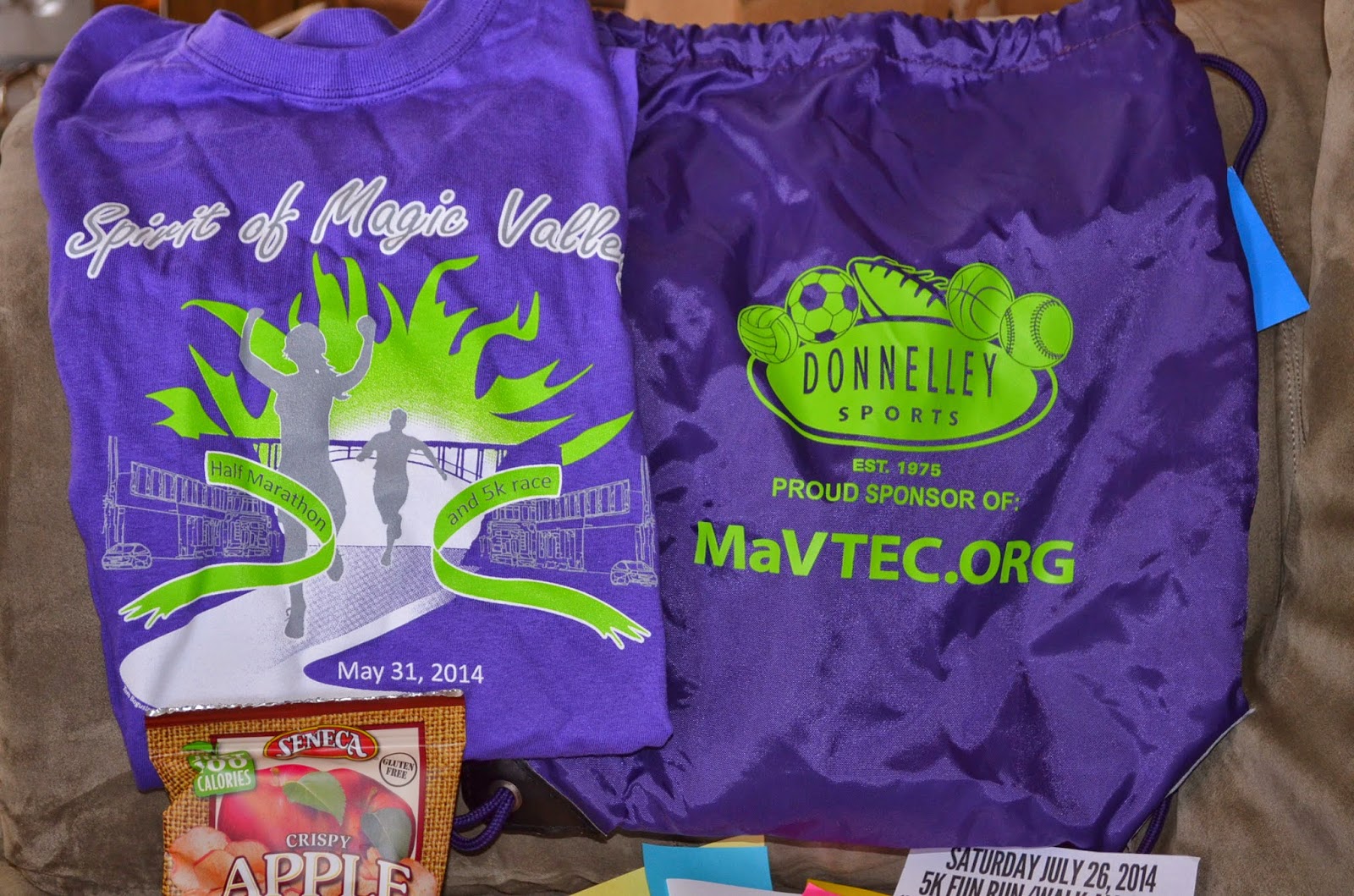 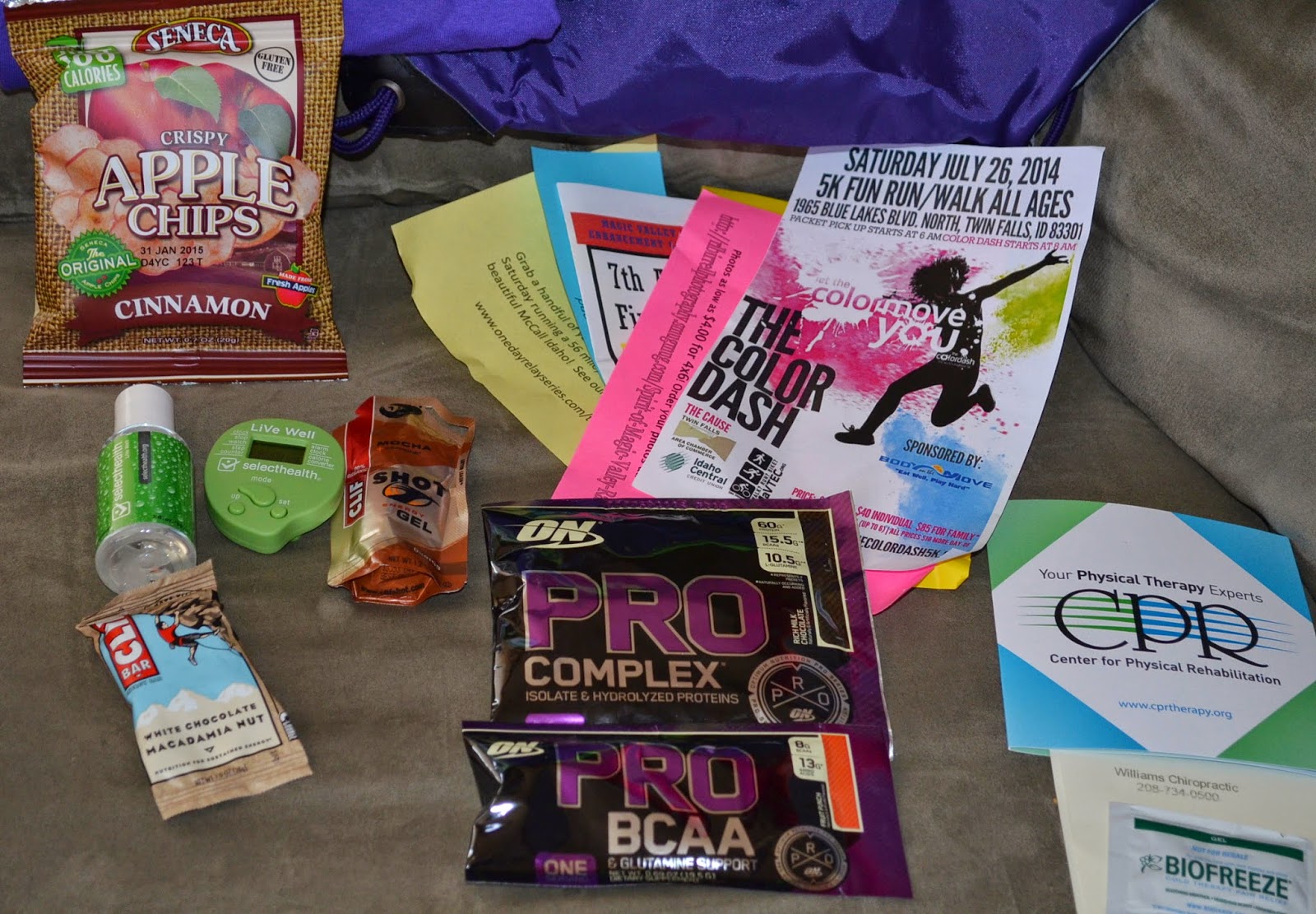 BUT the race swag was really nice. There were cotton race shirts - mine will be sadly going into my thrift store pile, but there were those drawstring backpacks. And a gel and biofreeze and some snacky things. So nice to get THINGS I can USE in my swag bags. TOO many races have just, well, really nothing other then crap I have to toss in the recycle pile or the thrift store pile. OR they have nothing at all.

After packet pickup, I started getting some major anxiety. Now that I have calmed down, I know why it happened. But we are not going to discuss it here. :-)

I attempted an early bedtime. I don't think I got to sleep until after midnight. A 6am wake up call, some oatmeal and coffee, and I set out early. This race weekend was Western Days in the town and there was a parade closing the main vein in town. So I had to leave early so I could beat the road closure.

The crowd was small, and I hoped they were as slow runners as they are drivers. I did a quick warm up and got close to the front of the group. I figured most of them were going to be walkers. 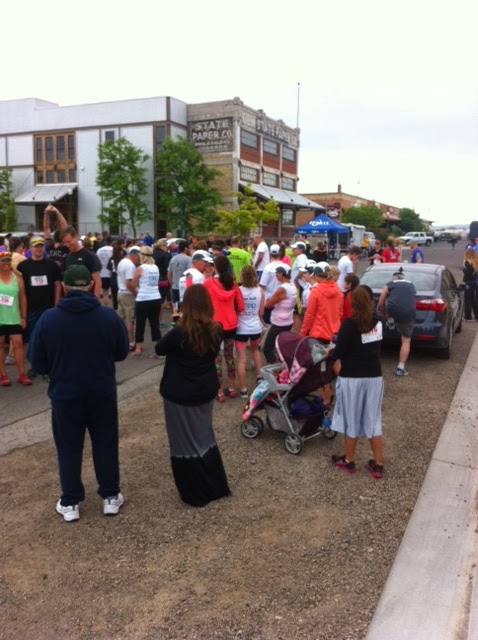 Everything started right on time. I thought I was going at an easy pace but I felt like the first .25 mile was hella hard. I checked my pace and noticed I was doing a 7:xx. Yea. I had to slow my roll. 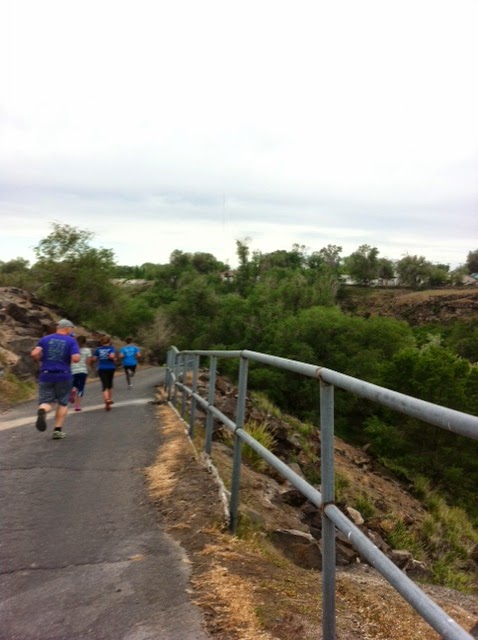 I had the opportunity to check out the coarse the day before but I declined. I was told something about this hill. I was a little worried about going back up it. 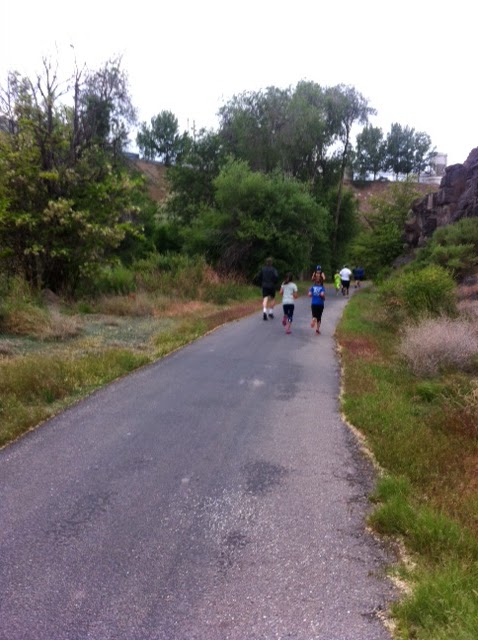 This is the bottom of that little hill. The path was greenbelt-y and fairly nice. There is a creek thing on the left of the pic. I was thankful that the weather was cloudy and right around 60 degrees.

Around the 1st mile, I started going the same pace as another girl. I think I came up on her and started going her pace. I was huffing and puffing and she was snot rocketing and burping. You know when you burp, nothing good comes after, right? I was trying to speed up and she was trying to keep up. At the half way turnaround she didn't turn around but kept running because she had to puke. I want to say that was thanks to me for pushing her pace but I think she was just having a bad morning. She passed me and finished a bit before me. 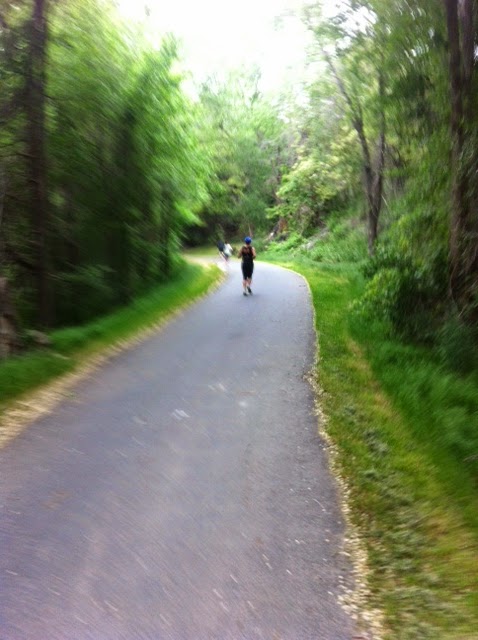 There was a nasty sewer vent and you had to pass it twice on this out and back. It was pretty nasty and I think I heard some Ewwwwws! because of it. Me, I tried not to breathe.

5K's are hard. I think I really have to spend more time training specifically for it, then I do with any other distance. In my running world, if I do miles, eventually they will start to get faster. With how I have been training with reduced miles, 5k's are hard. 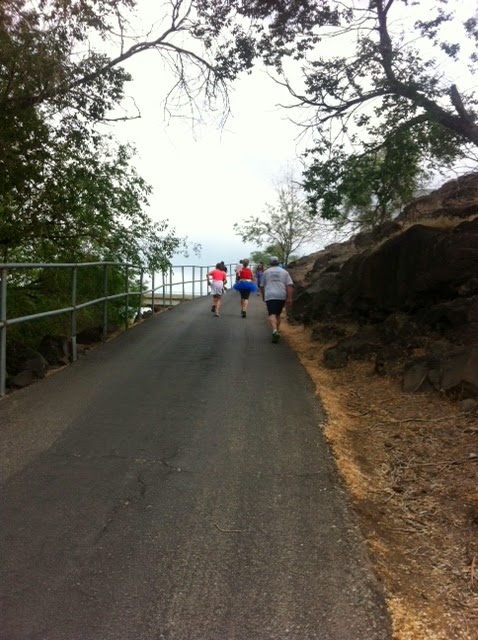 It's not often you can see how steep a hill is when a pic is taken of it. This was taken on the way up. I walked this. I was already breathing heavier then I should have been.

I plodded back to the finish and was able to kick it a bit at the end. I didn't win anything, but I was close enough I should have kicked it harder and I would have gotten 3rd in my AG. It was pretty close. I got 4th, and I have no complaints.

No complaints because this is what was waiting for us at the finish! Coors, Alaskan IPA and some porter. I picked the porter.

And the food! Kiwi Loco fro yo - all the flavors. I picked chocolate which I smooshed my brownie into it. Watermelon, hot dogs (I wanted another, it was really good), the butteriest corn and ON Amino energy drink stuff. I picked the orange. Which was really good. 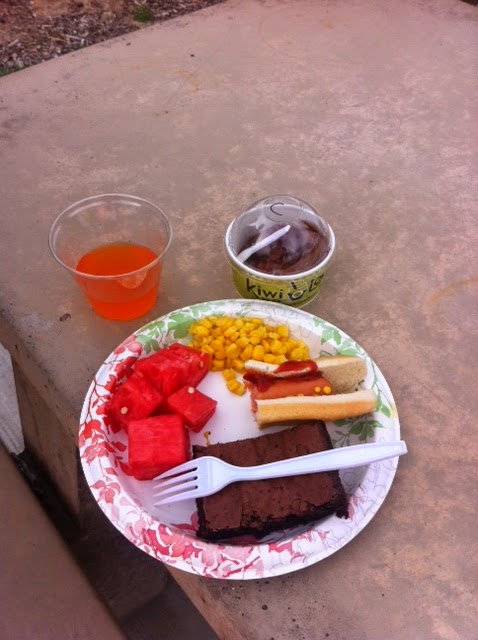 I would so go back and do this race. If I train a little harder for the 5k, I would actually have a chance. My knee is doing better and since that is a reason why I have gotten slower, I should be able to bounce back get my leggies to remember that they have been faster.

Any advice for a faster 5K? I'm sure speedwork is the answer. :-) How was your weekend?