September 01, 2014
Even though I have lived in Idaho my whole life, there are so many places that I have never explored!

Even though I am not in Boise right now, currently being in the small town that I am now in, it's full of neat geological landmarks that are very cool. They make me very proud to be an Idahoan! I have been trying to post a lot of them on Instagram, so if you don't see it on the blog, it's on there.

We took a little drive to Balanced Rock. South of Buhl in the Salmon Falls Creek Canyon stands world-famous Balanced Rock. Over 48 feet tall and 40 tons, the wind-carved rock balances precariously on a pedestal only 3 feet by 17 inches. Nearby Balanced Rock Park is an excellent spot for a picnic. 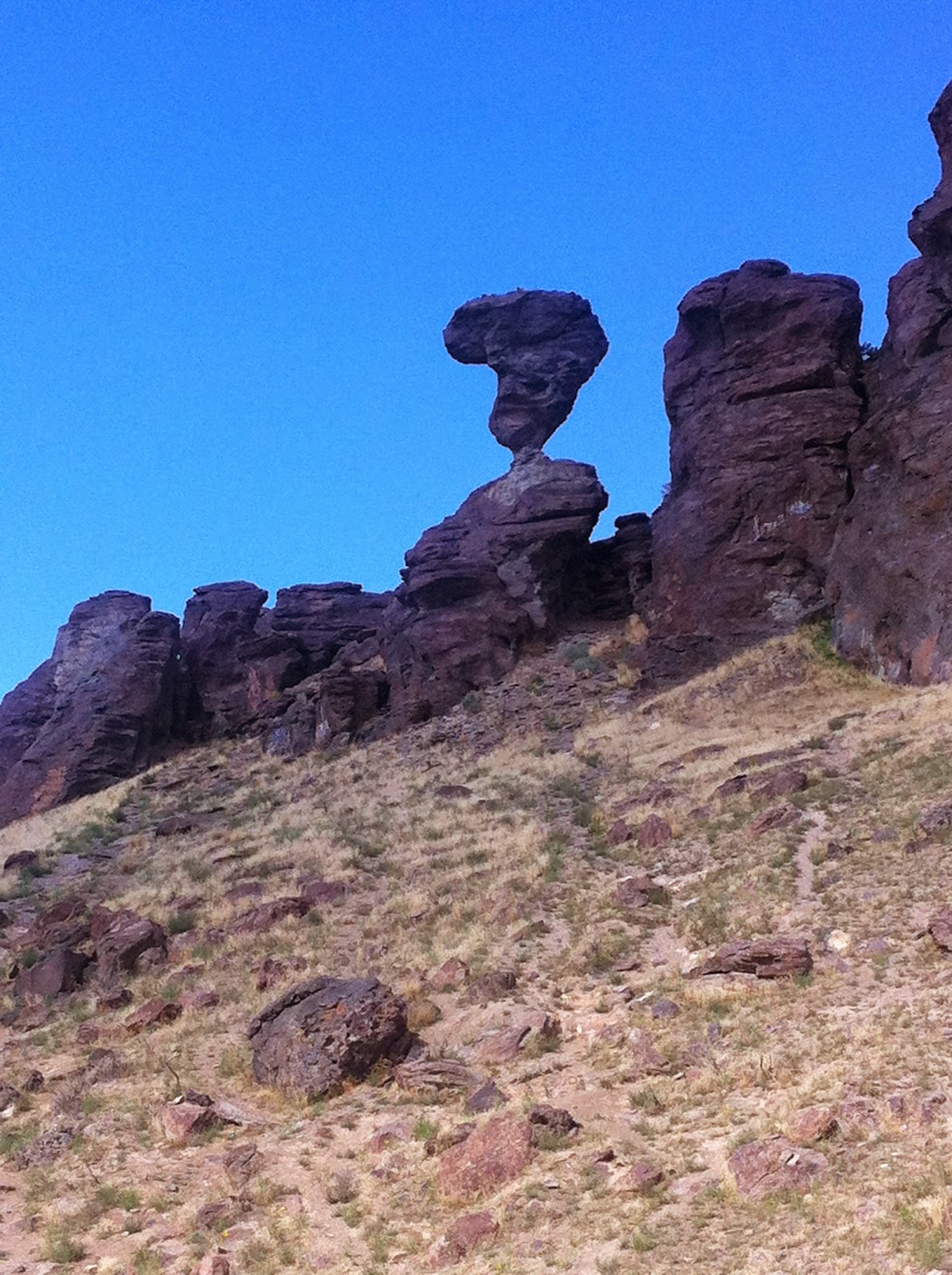 The BF said it was going to be an all day drive but the Visit Idaho website has directions. It only took us ALL DAY because we had to shop in the junk stores in Buhl and of course the MANDATORY ice cream at Cloverleaf Creamery! 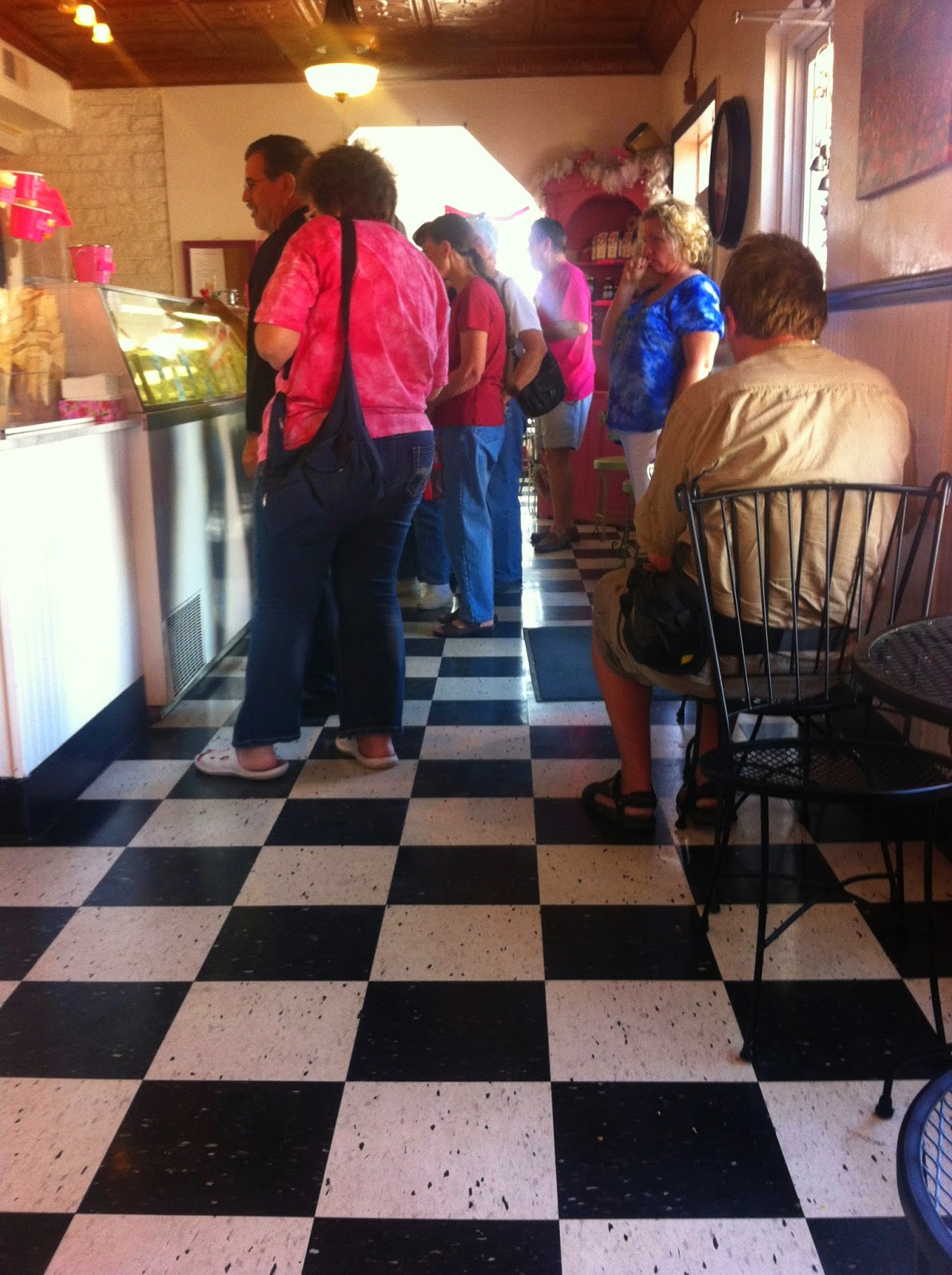 Anyways, Balanced Rock has signs for directions in town a block away from the Creamery. You drive country roads until you hit the canyon. You know you are super close then. 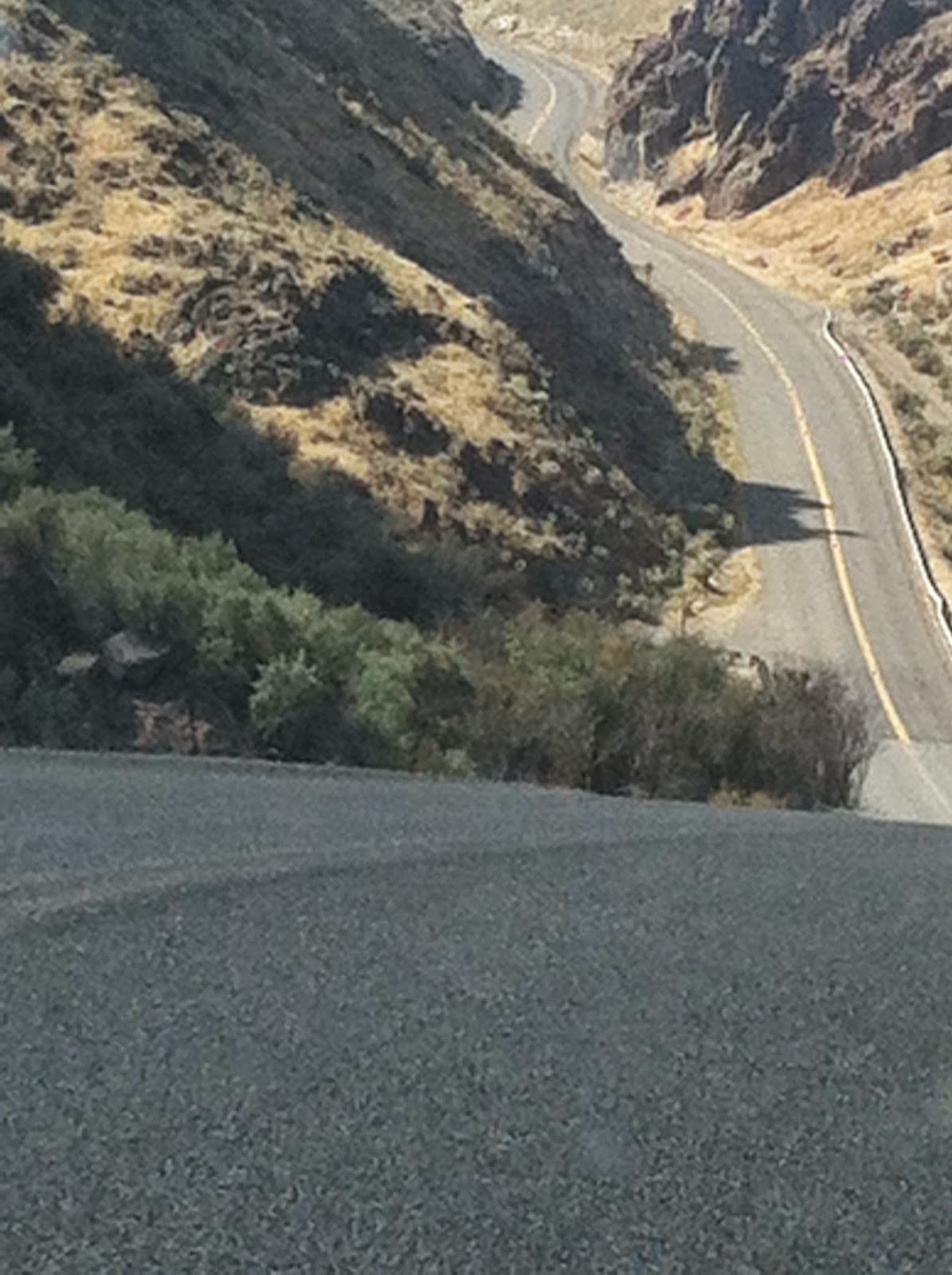 At the bottom of this hill - when you get to it you will know what I am talking about - it's steep - to the left is a park with potties, fire & bbq pits, swings, horseshoe pits and lots of picnic tables. There is a stream with a TON of trout. I was walking over to the stream and a garter snake slithered by and I actually screamed. I'm such a wuss.

There were a crazy amount of flies, so just FYI. I took off a 2" piece of crust from my sandwich and within minutes it was covered in flies.

If you don't turn left into the park, just keep going straight. A mile up the road to the right is Balanced Rock. You can't miss it. 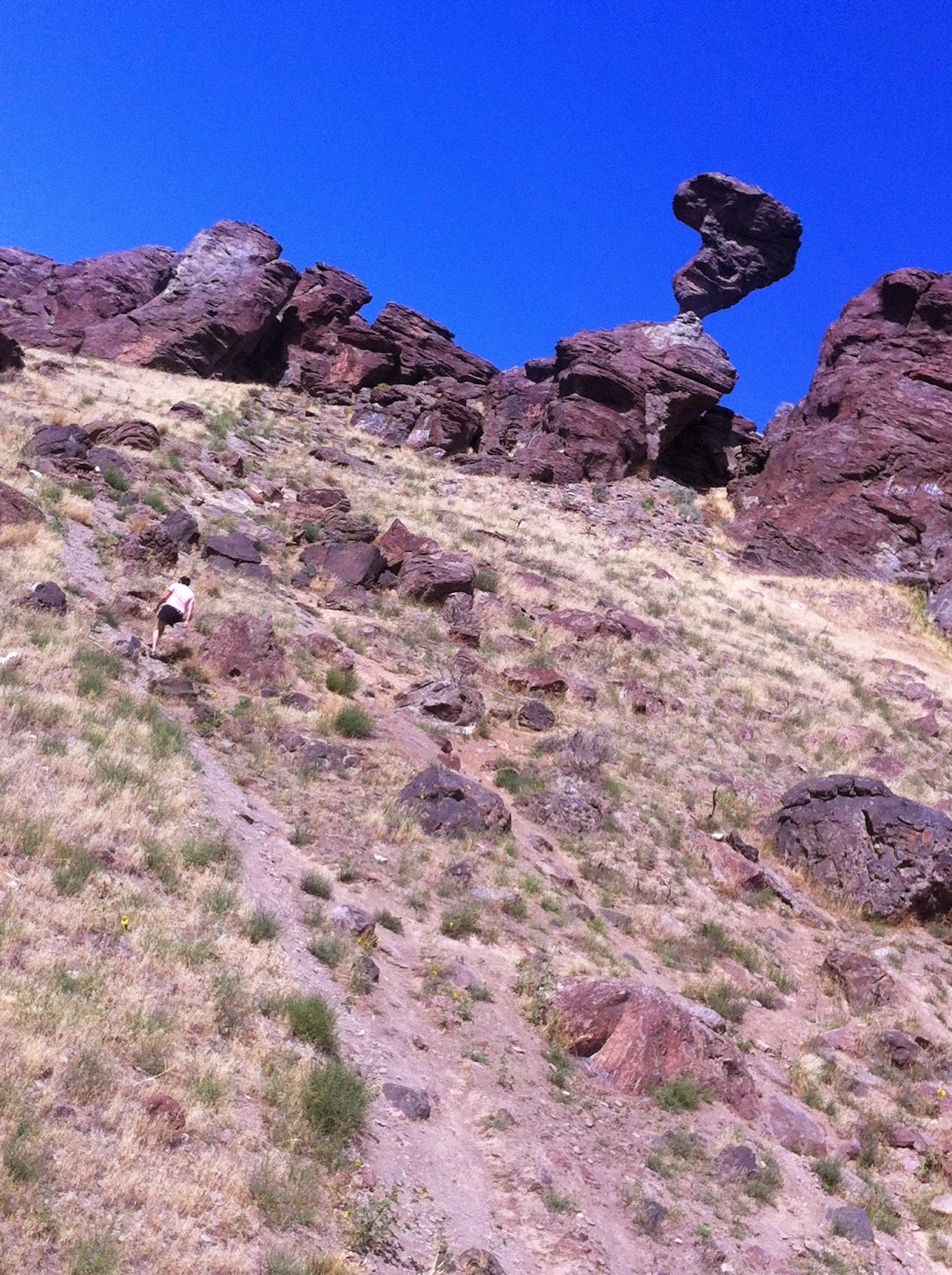 You can climb right up to the rock. The trail is not that hard or that long. It is way easier then climbing Tablerock in Boise. The trail is not made for flip flops either. Make sure you are wearing shoes or Teva's at least. 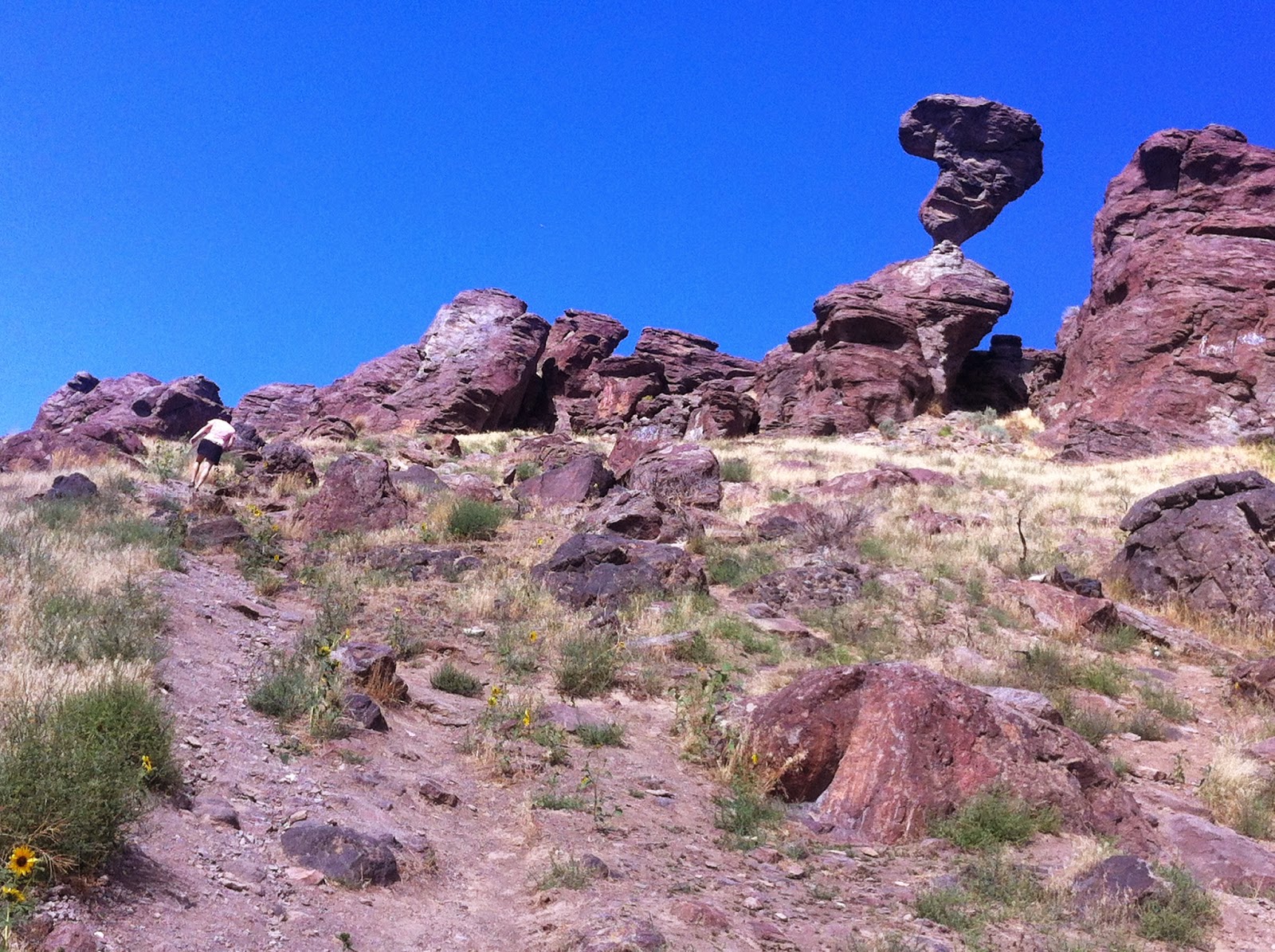 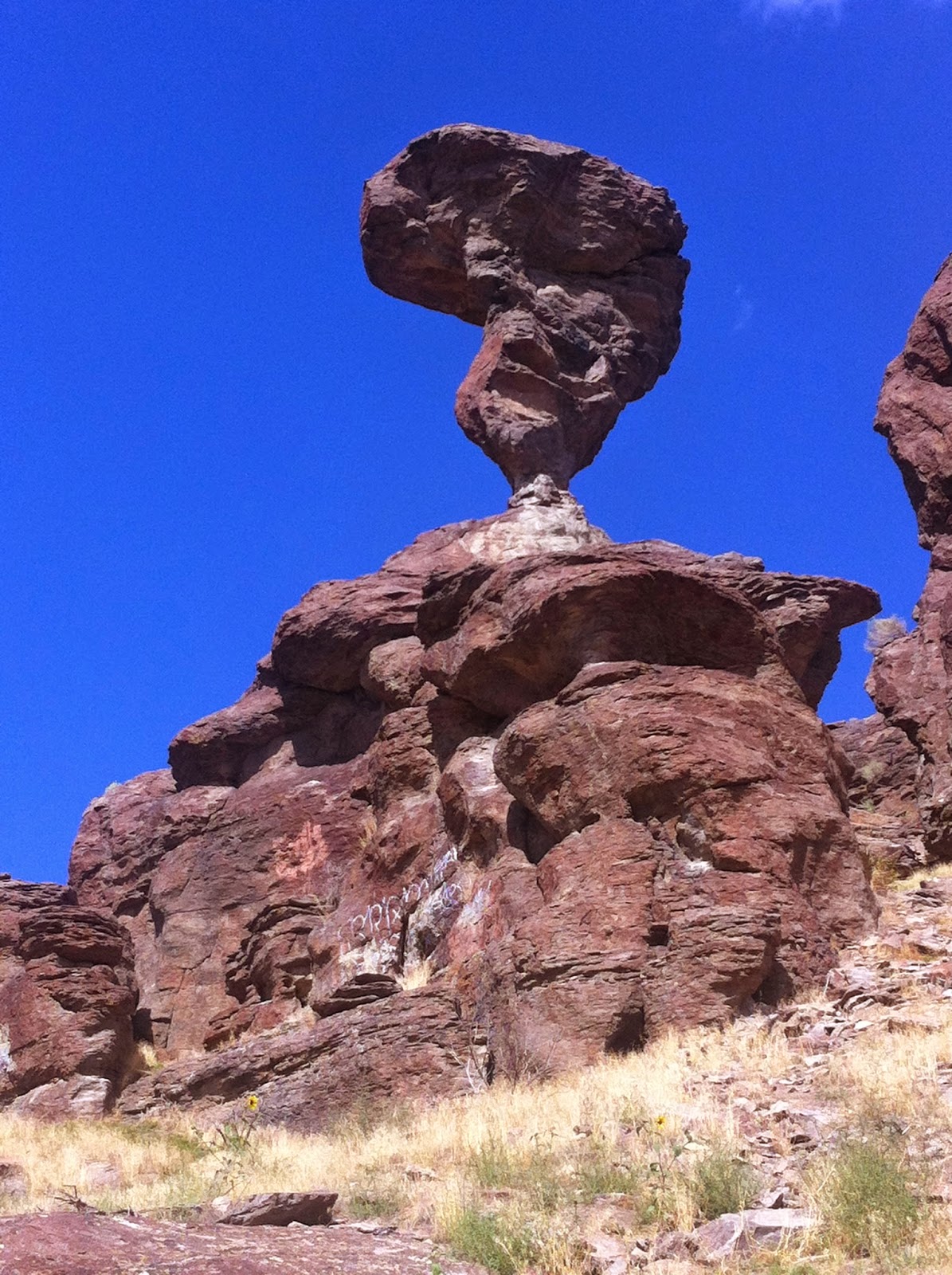 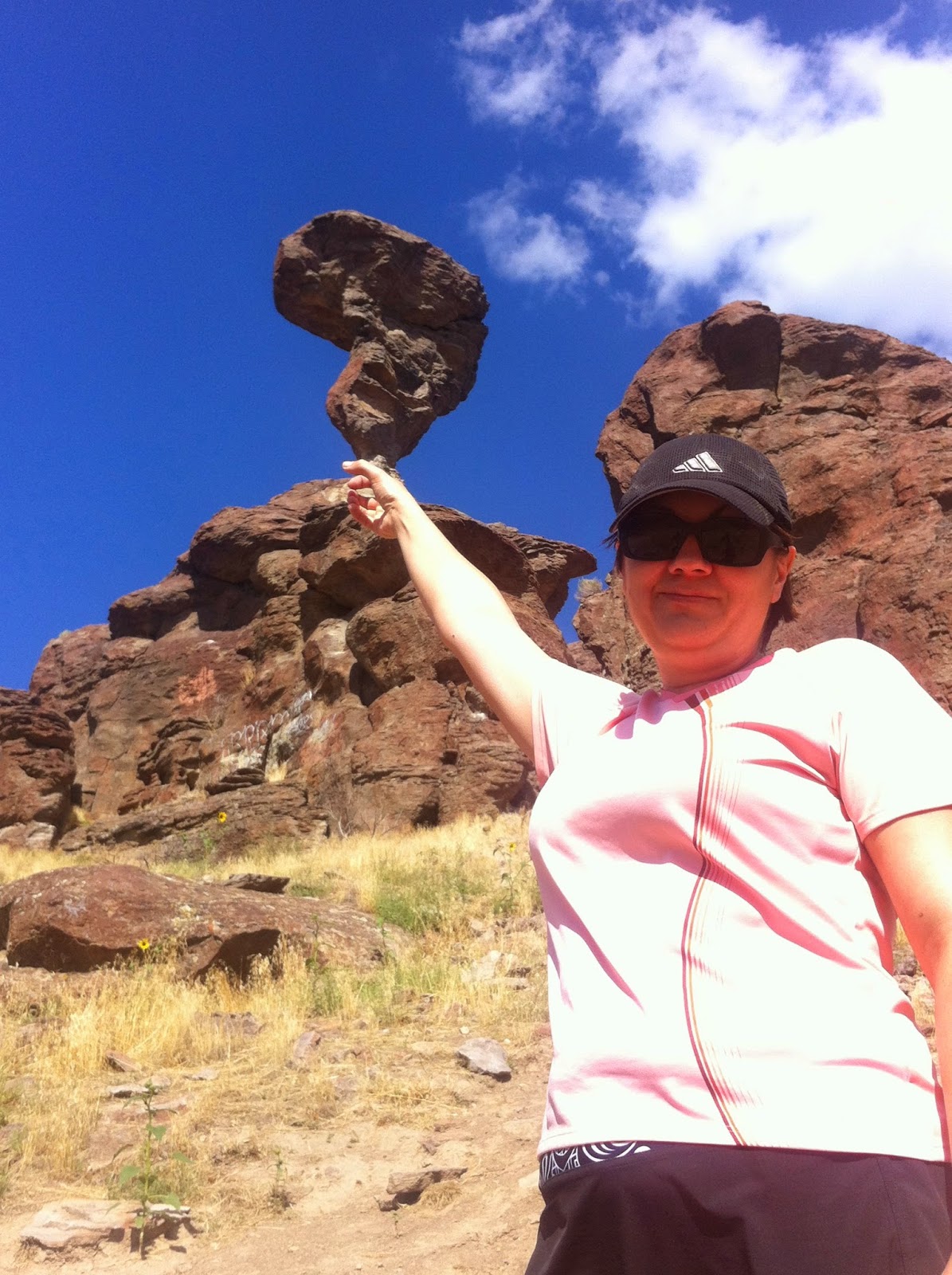 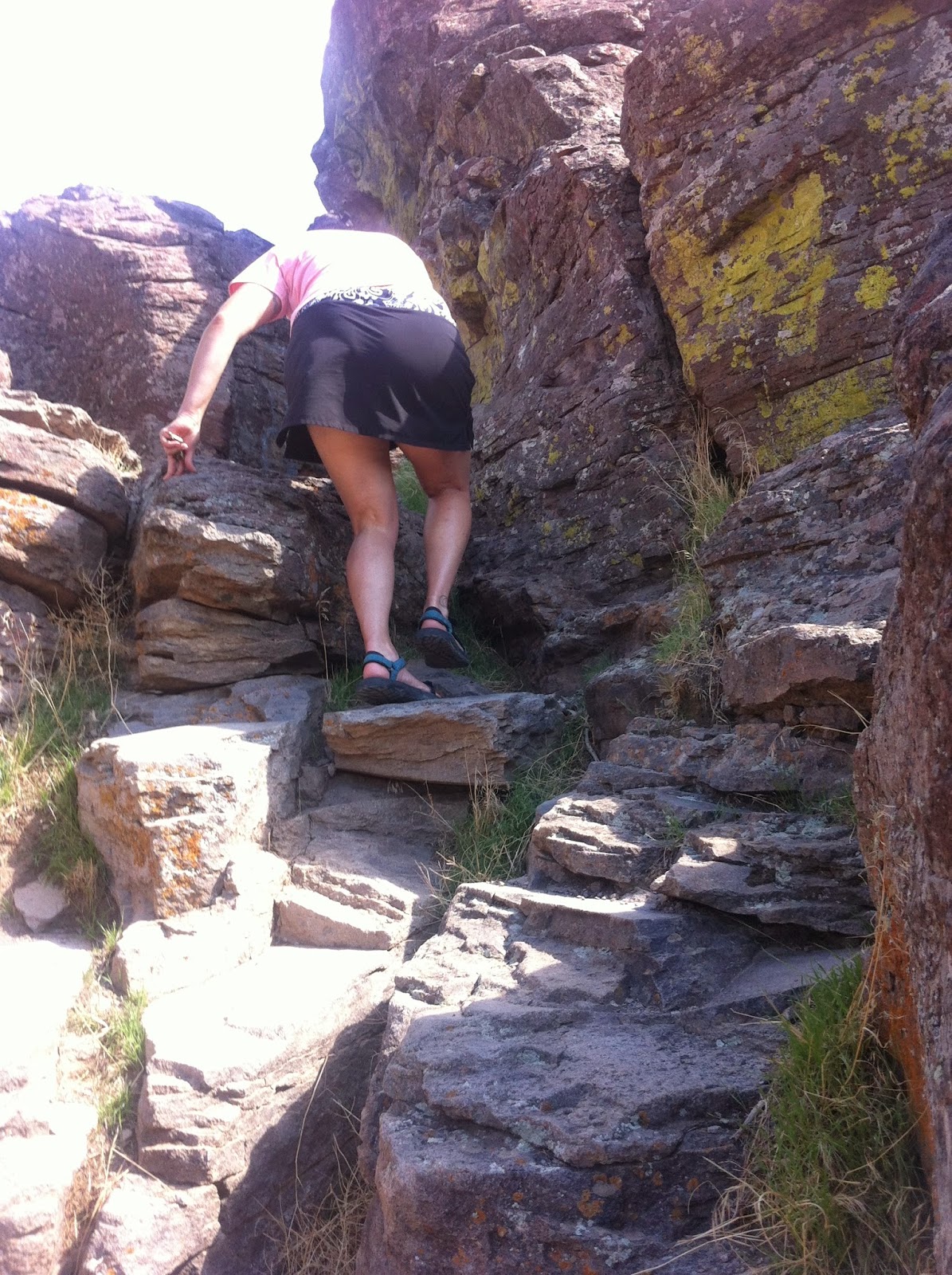 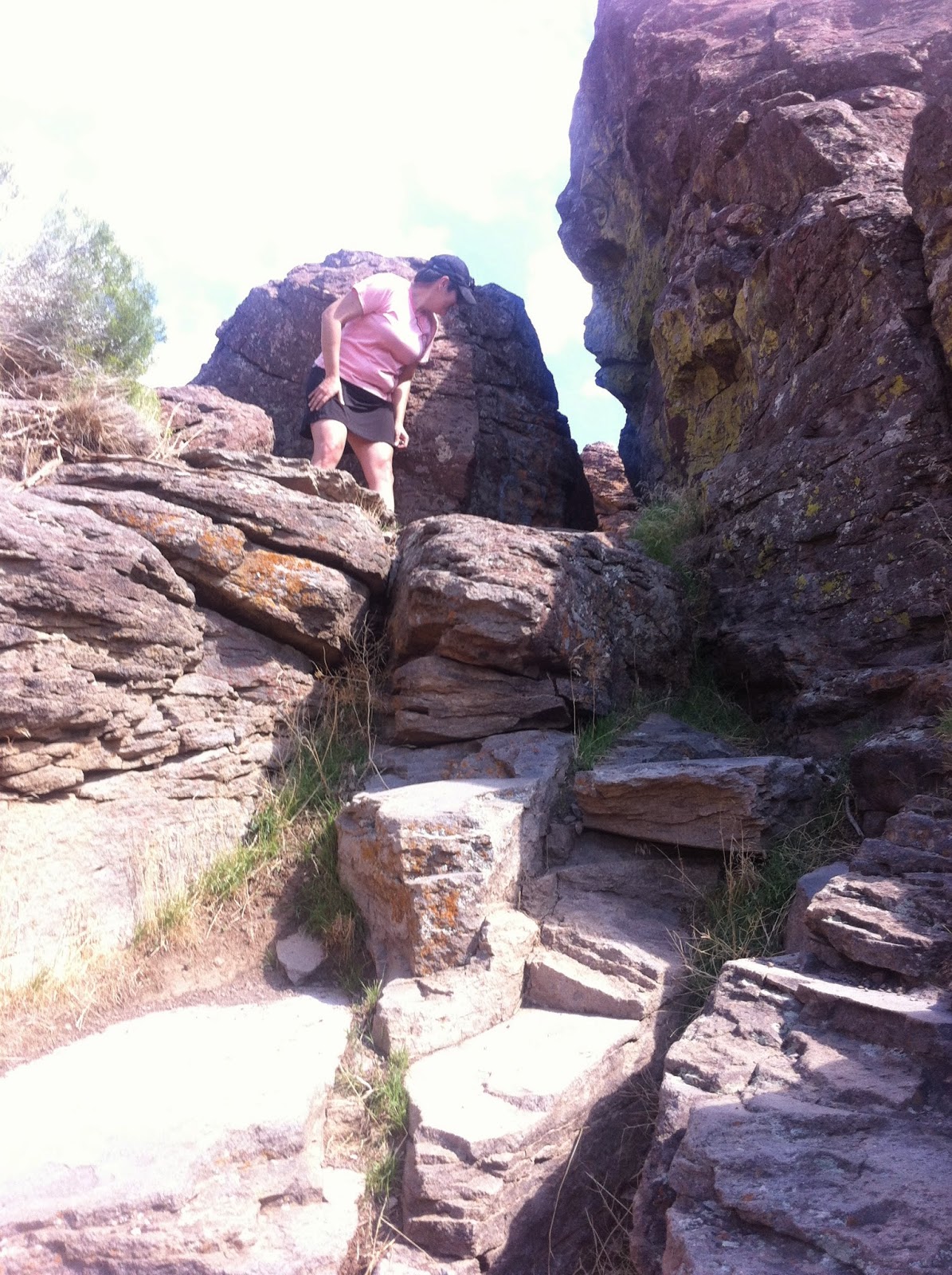 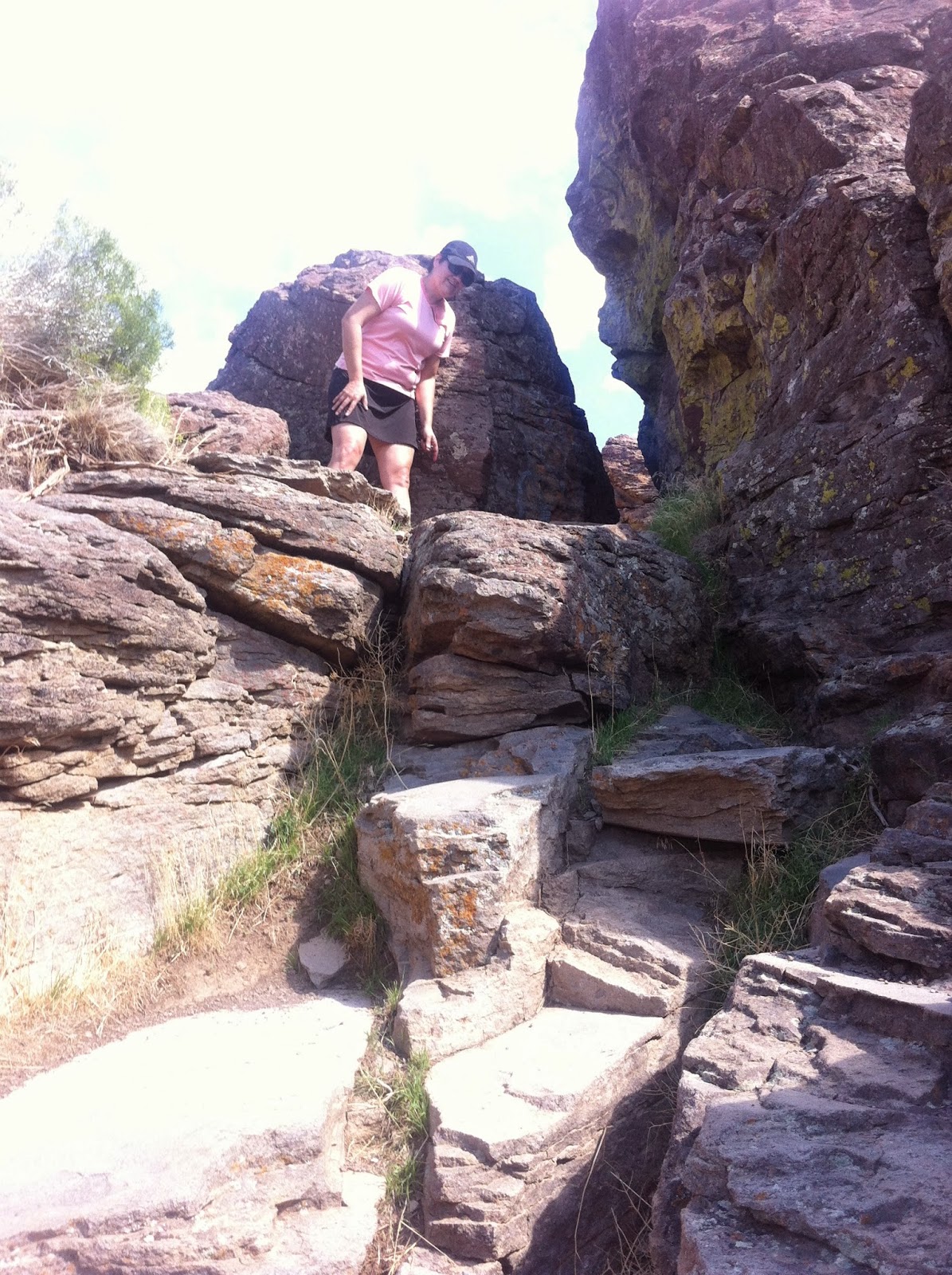 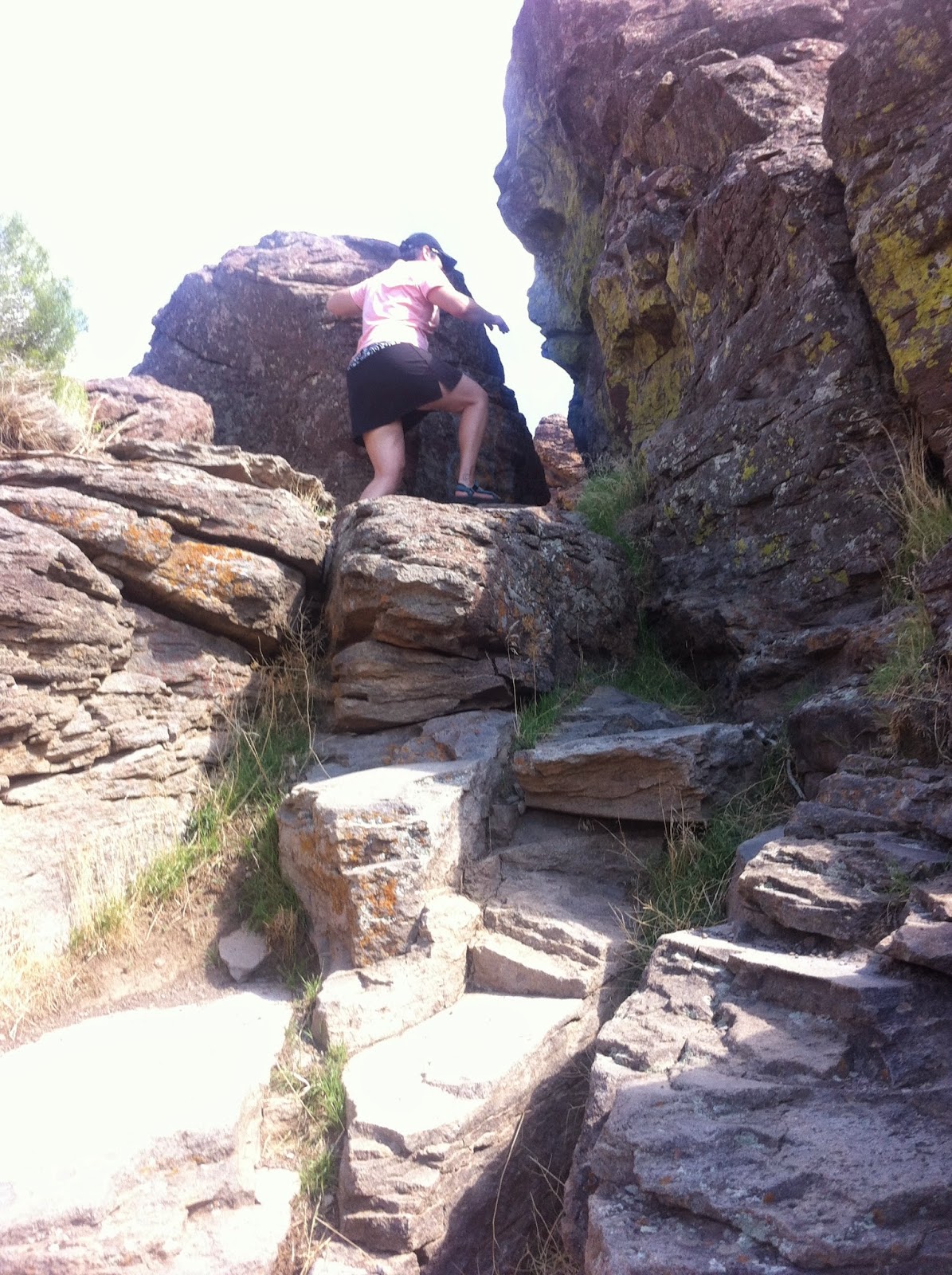 To the right on the pics above, is the base of the rock. You can fairly easily climb right to the 3' rock base. 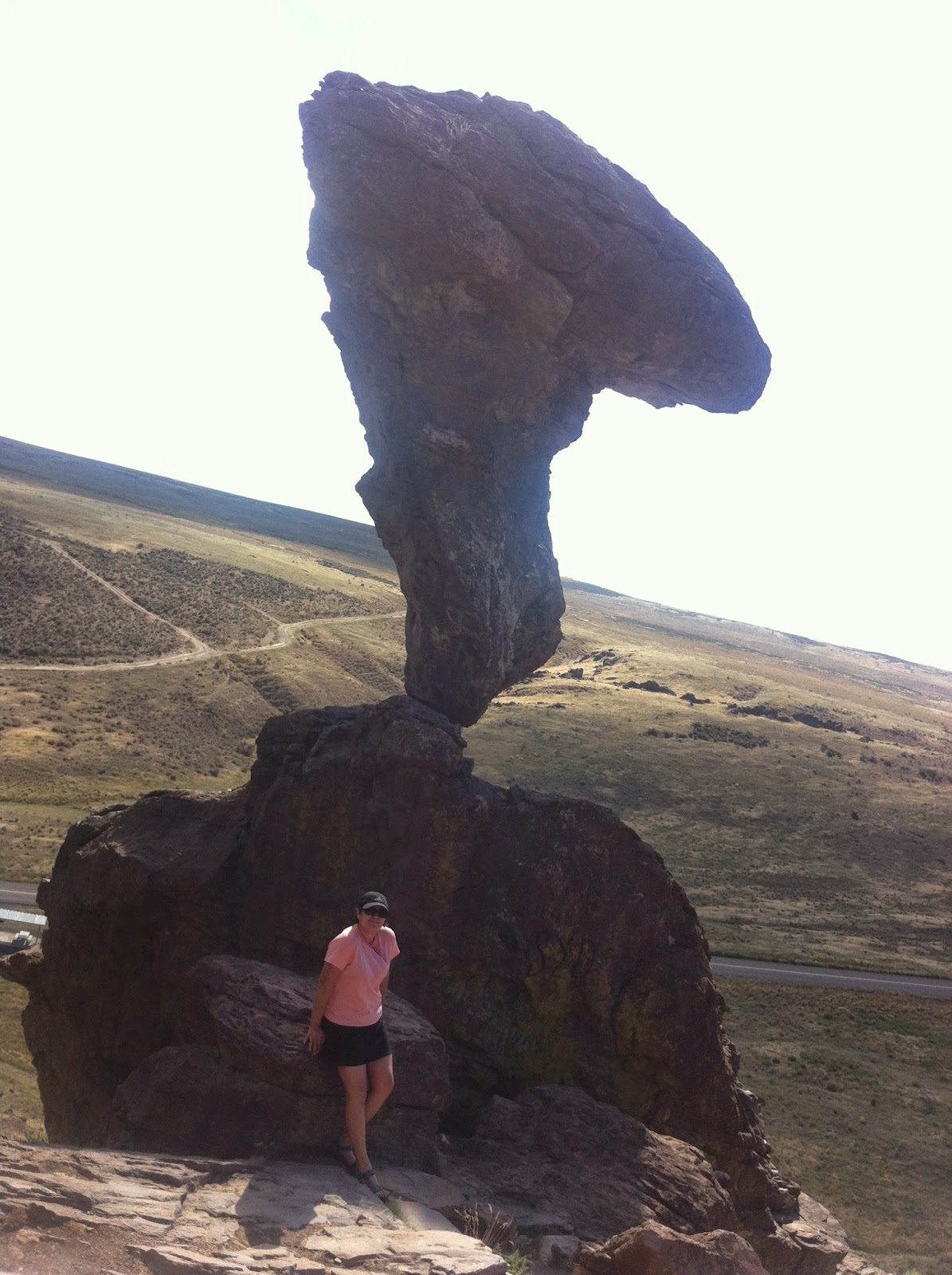 I thought there was going to be more hiking involved to get here, but it is right on the side of the road. It was really easy to get to coming from Twin Falls to Buhl. I didn't spend much time exploring too far away from the rock but I heard from a FB friend that there used to be a hot springs nearby. I think it was gated off. Which made me sad. But not that much because there are so many hot springs in this area, getting to another one won't be that hard.

As I was looking into the Rock before my drive out there, the Times News - the Twin Falls newspaper - had an interesting article about it.

I’ve heard that in the 1920s or 30s pranksters tried to blow up Balanced Rock with dynamite and now it’s reinforced with concrete. What’s the story?

South of Buhl in the Salmon Falls Creek Canyon stands the world-famous landmark Balanced Rock. Over 48 feet high, 40 feet wide and weighing 40 tons, the rock balances precariously on a pedestal only 3 feet by 17 1/2 inches. It towers about 200 feet above the canyon floor.

According to the Twin Falls Daily News, Feb. 13, 1929: “It is a current story that a local vandal once tried to bring this stone (Balanced Boulder of Buhl) to earth with a pickaxe. When remonstrated with, he said he had lived there for 40 years and was tired of waiting for the blamed thing to fall. ‘Don’t you know,’ said the neighbor, ‘that stone contains over 5,000 cubic feet of lava and weighs between 400 and 500 tons? If you had broken through the stem you would sure have been killed.’ The fellow said he knew it: said it was worth it. The pivot has since been artificially protected with a layer of cement.” Mareda Wright, Twin Falls Public Library technical services department head, found the article in the library’s digital newspaper archives.

“Some years ago (prior 1974) it was decided to help nature somewhat and the narrow neck was reinforced to prevent loss of the unusual rock formation through vandalism, etc.” according to “Early History of Castleford, Idaho” compiled by the Castleford Community Men’s Club.

The rock is now on land managed by the U.S. Bureau of Land Management, paired with the nearby Balanced RockPark operated by Twin Falls County, said said Rick Novacek, the county’s parks and waterways director.

Some sources have claimed the mass on that pedestal is a world record. “Not by a long shot,” said Shawn Willsey, College of Southern Idaho professor of geology. “This is just wishful thinking on the part of our local citizens. Our local Balanced Rock is thought to weigh about 40 tons. Compare this to Idol Rock in England which weighs over 200 tons. Another example is Balanced Rock in Arches National Park, Utah, which is the size of three school buses precariously perched. Also check out balanced rocks at Garden of the Gods, Colorado, and Mexican Hat, Utah.”

Many assume the rock is basalt sculpted by wind. “However, the rock type is rhyolite,” said geologist Art Small.

Rhyolite has a surplus of silica and many mineral crystals form while the melted rock is still far below the surface of the earth, Small said. “This increases the viscosity of the melt and usually plugs up the passageways to the surface. This results in a large increase in pressure and usually results in a volcanic explosion.”

The rhyolite usually spreads from the eruptive center as airborne very hot ash (as hot as 1,800 degrees F) said Small. Rhyolite only rarely flows as a liquid upon the surface.
“Essentially, the Balanced Rock area (along with Twin Falls) was the site of explosive volcanic activity associated with the passage of the North American plate over the Yellowstone Hot Spot,” Willsey said. “In other words, the Yellowstone volcano was here 8 million years ago and areas such as Balanced Rock and Shoshone Falls record this event.”

Rhyolite is very different than basalt, which is the typical “lava rock” found all over the Snake River Plain. The rhyolite rocks are much older than the basalts, which are typically less than 1 million years old.

“The shape of Balanced Rock is the product of differential weathering,” Willsey said. Water exploits fractures and weak zones in the rock and can eventually erode and shape rocks into bizarre shapes. “The wind is usually overrated as a weathering agent and in this case, did very little in shaping Balanced Rock.” The main factors would have been freeze/thaw cycles in fractures of the rock along with fracturing that occurred when the rock formed and cooled and contracted.


So I have to say Idaho is pretty cool. Have you ever been to Balanced Rock? Any hot springs nearby that you know of? If you are not in Idaho, where is the coolest geological place you have been to?