November 12, 2014
Right before Halloween I ran in the Twin Falls Great Pumpkin 5k.

The race ran around the College of Southern Idaho campus.

The night before the race I made my Halloween skirt. I put my Flat Tanya out. I wanted to wear the witch hat during but the wind really picked up so it was pointless to even try.

This was the first race with the BF. I wanted him to experience how hard it is to place in a race with my half-hearted running schedule.

Someone really didn't like the running idea. I may have woken us up a little too early. I woke up at 7am for the 10am race. I really think I should have slept in til 8am. My head was really tired.

The weather was perfect for this race. It was perfect race weather. But it warmed up to over 60 degrees. I felt overdressed with the ProCompression socks. I took off my black Nike ProCombat shirt I wore under my Team Beef shirt. It wasn't worth wearing the long sleeved.

The race started a few minutes late because the kids mile race was finishing up. It wasn't a big deal.

I know I started this race off a little too fast. The BF also started his race off too fast too. I'm trying to get him to write a race report....

I slowed my roll and kept getting passed consistently. But the wind. Man, I want to blame the wind here. No, really. It's one thing I really hate about the Twin Falls area is that it is windier then Boise. Of course pre-race there wasn't much wind. But by the time the race started, it had picked up and I fell apart.

I actually had to stop and walk twice in the mile 2. I don't know why I let my head tell me to walk but I just could not run! I'm blaming my strong dislike of the wind.

Since this race was so small, I really thought I had a chance of placing. But once I started getting passed at the end of the first mile, I knew that I wasn't going to get back up to any of the girls. I felt like I was out of my AG anyways. So I guess I kinda gave up and just went with it. 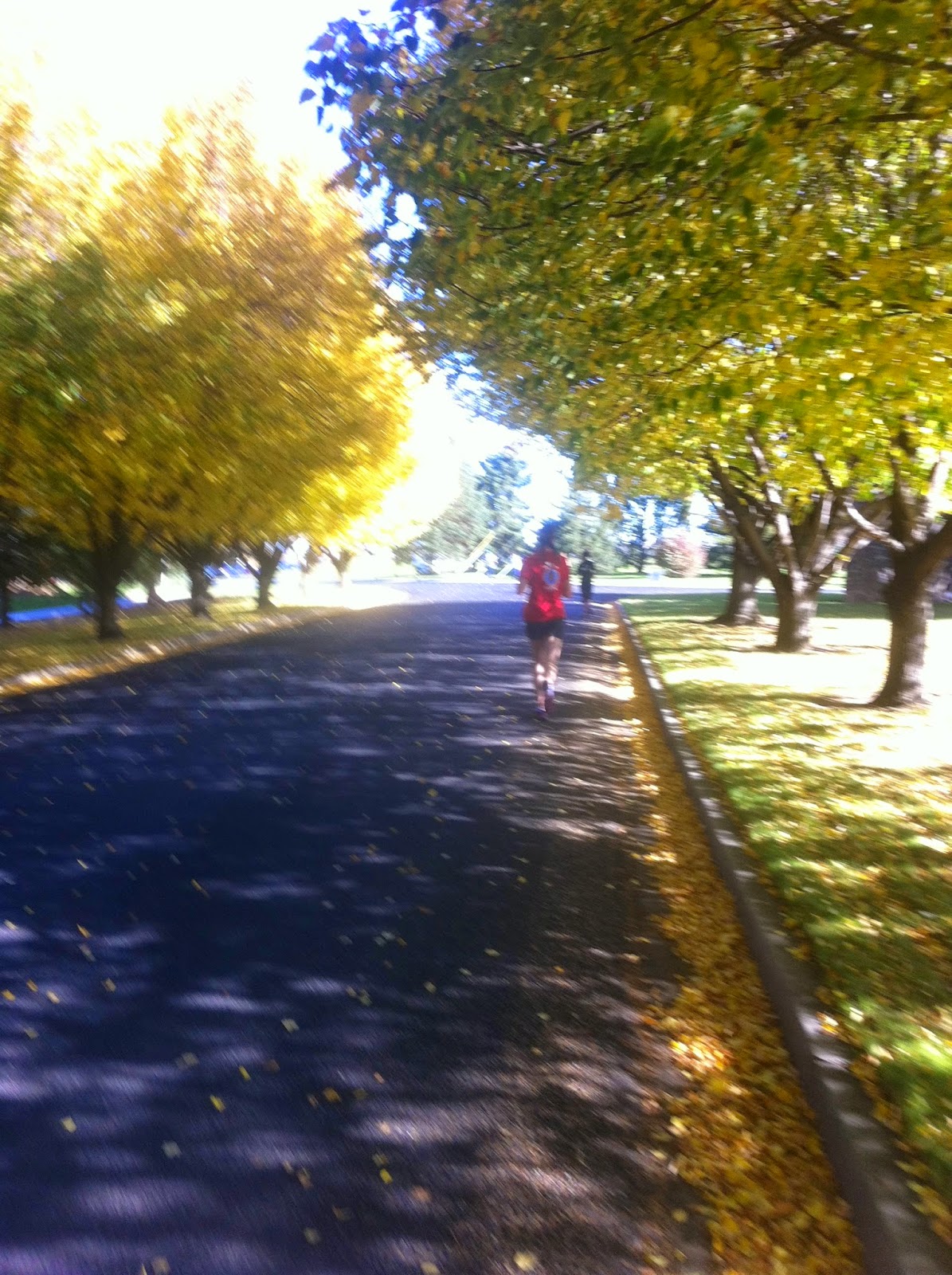 The path that we ran on on the campus was really pretty but I was just not really able to enjoy it. 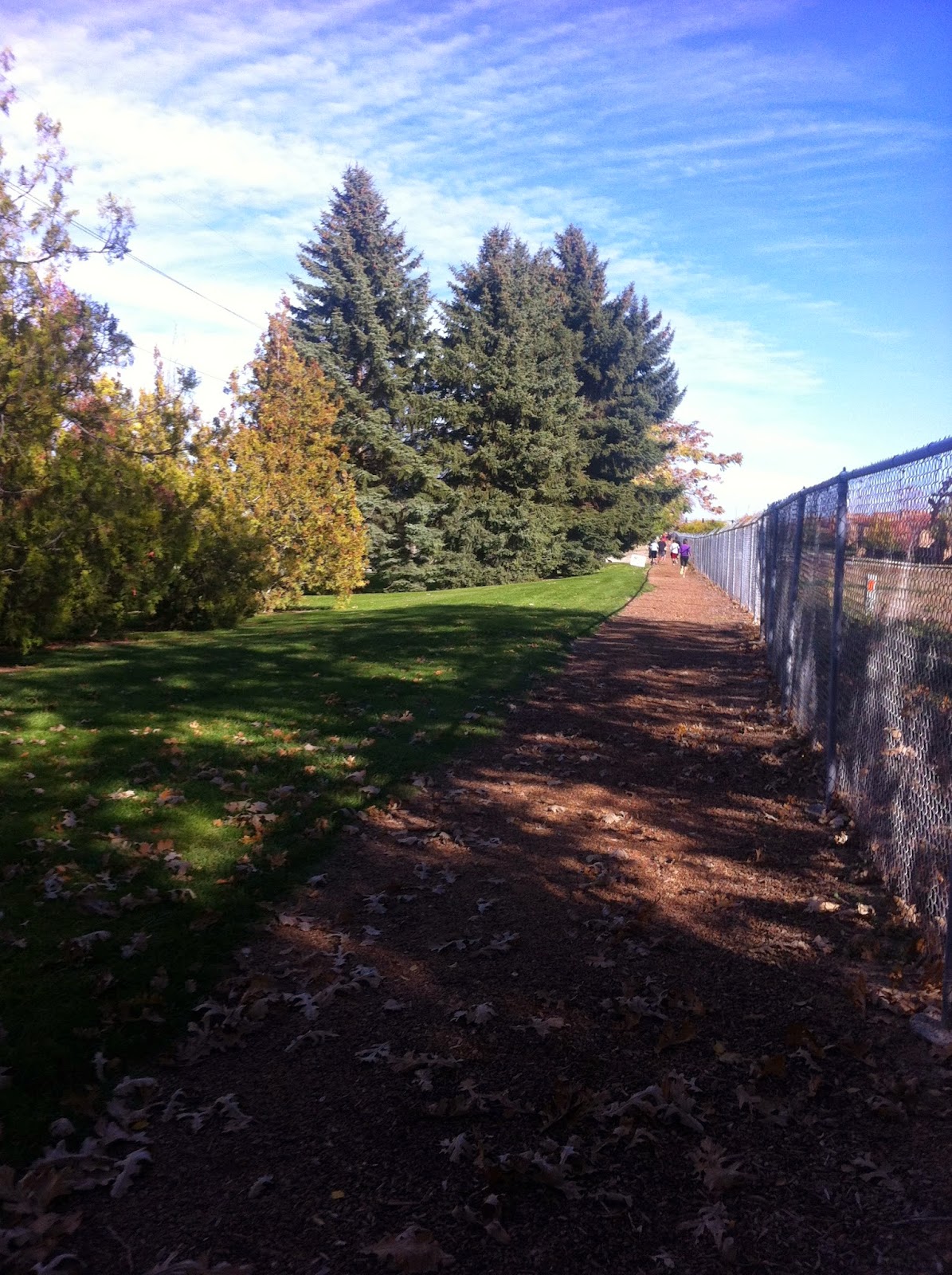 This path is a new path and it is on my list to run on again! 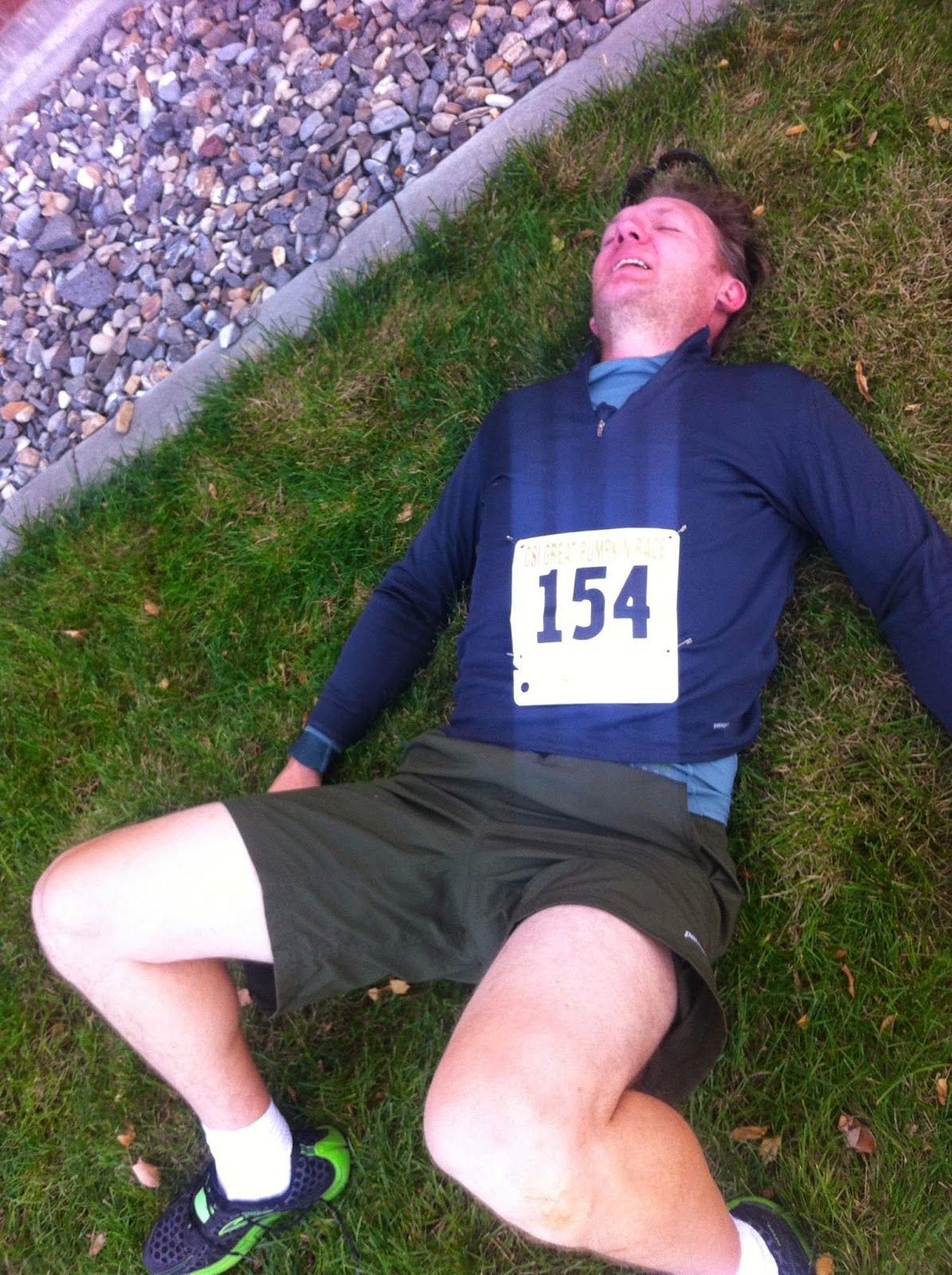 When I finished up right at 30 minutes - ick - I came across the boy sprawled out on the ground. He couldn't breathe and with the condition that he was in, I thought he placed. He said his first mile was in 7:14!

There was so much chili and cornbread post race. We even took bowls of it home! After everyone finished eating, there was a raffle and all the AG winners getting their swag. I knew I wasn't gonna win jack on this race so I wasn't worried. There were people that the BF passed at the end that placed. He didn't get his name called so he made such a strong effort and didn't win anything. He actually was bummed. And I was both sad for him because he was hurting, and pleased because it really is hard to place and now he knows my pain.

We walked around campus to see the results that were posted outside. Just to check his final time and what the other finishers did.

There was also a lot of Halloween events going on at campus. One was trying to make it into the Guinness Book of World Records for the most Jack o'Lanterns. They actually did it! 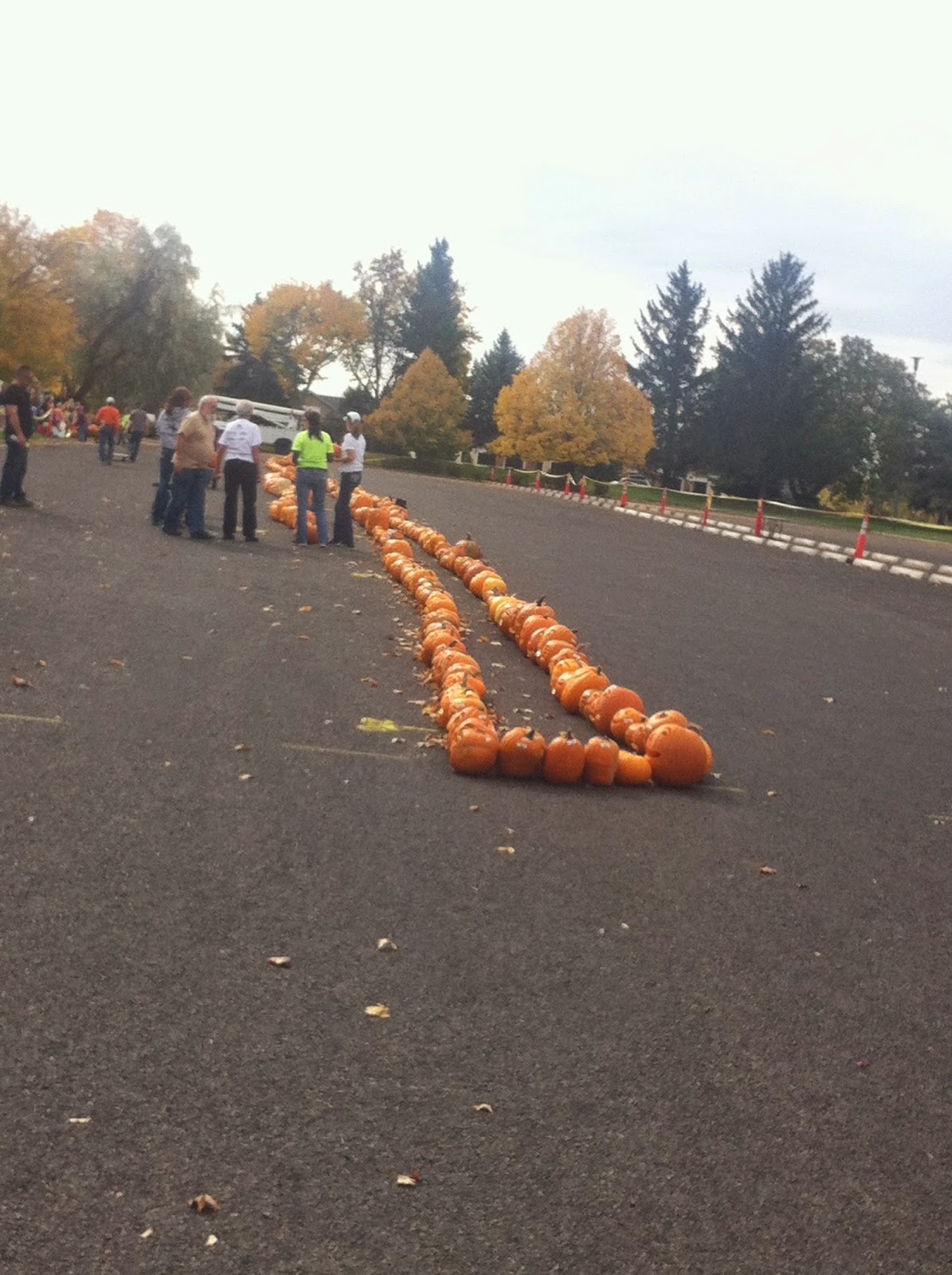 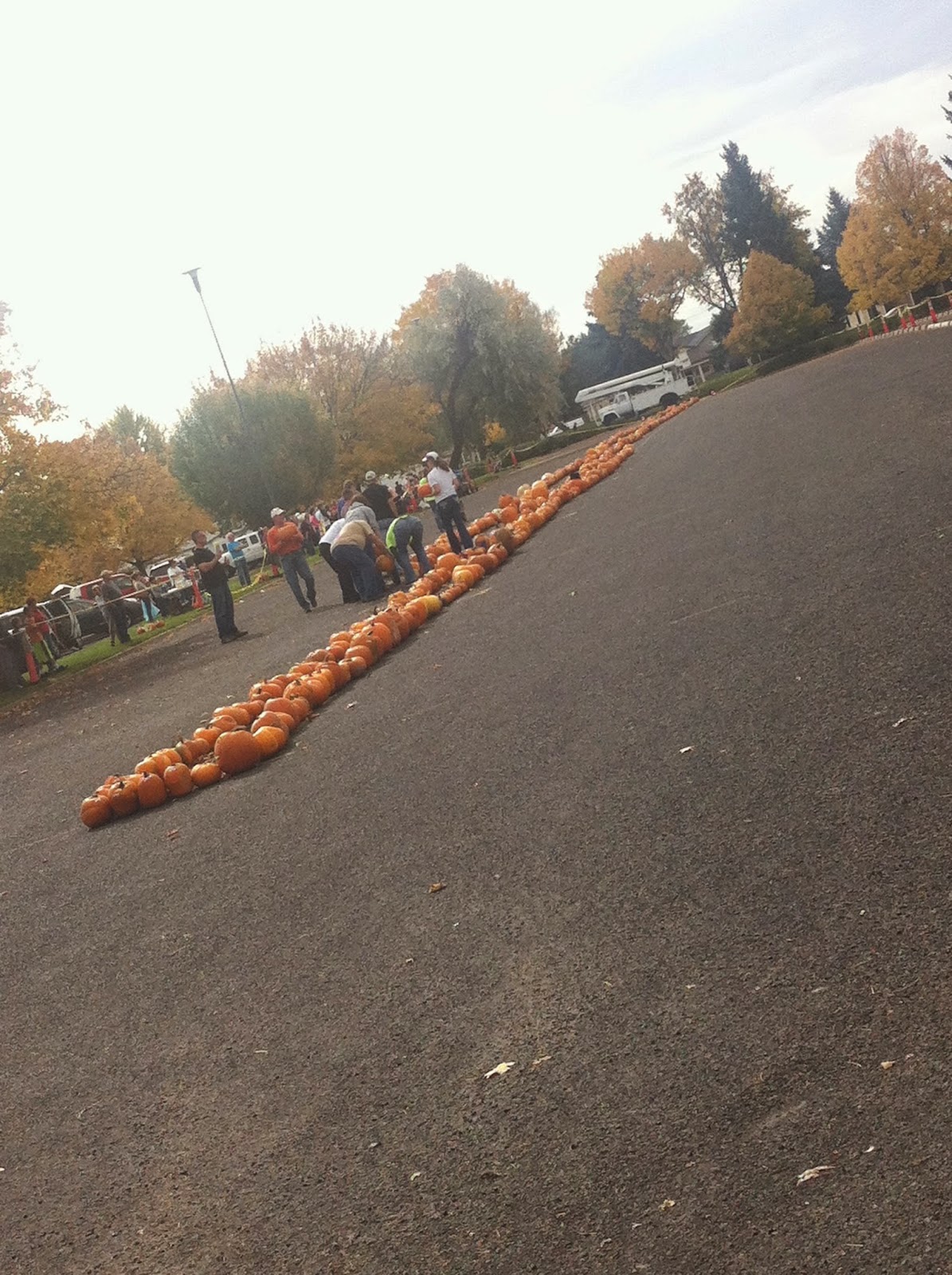 The BF finished in 26:10, 6th in his AG and 40th overall. I finished in 30:06. I was 7th in my AG & 64 overall. What running this race makes me realize is that the runners here in Twin Falls are legit and no joke. I feel like I need to step up my A-Game if I want to run here! I felt like the runners are just stronger here - even when I did the Rim to Rim and Spirit of Magic Valley earlier this year I felt the same way.

Did you run a Halloween race? Have you ever been in a race where you are made to feel like you need to step up with your training to get on "their" level?