April 29, 2018
I made a last minute race entry to a good race this weekend. It is the West Valley 5K Walk Run in Caldwell, Idaho.

I have to start out with this. The weather was just perfect for the race. There were plenty of race volunteers and the post race noms were welcomed.

With all of that, I just was not mentally into running the race. I had a crappy night the night before, and a 5am wake up just had me off my trotting game. My shirt kept riding up with my plumpness, which made the skirt attached to my capri's ride up in the back too. I kept messing with tugging my shirt down and my skirt in the back. It was just flat out distracting.


I went with it and didn't even care about my finishing time. I walked often and was playing PokemonGo on my phone. I was multitasking. :-)

I picked up my bib the morning of. The race was at the hospital in Caldwell. There were lots of medical and healthy living vendors at the race start. There was coffee and cookies from a local coffee shop, a chiropractor doing back cracking, and a few other tables that I should have taken a photo of. I picked up a travel toothbrush and toothpaste for a birthday vaycay coming up very soon!

This race was sponsored by the YMCA. They are building a new location and there is lots of hype about this new location. One of the Zumba instructors for the new location did almost a half hour of warm-up Zumba with the crowd. I have no coordination or rhythm, so Zumba scares me. But watching everyone have a good time, it actually looked like a lot of fun! Maybe eventually I will give a local class a try.

There were 2 distances for this race. A 5K and a 10K. The 10K started promptly at 10am. The 5K started at 10:03. Before the race the director gave out some rules - walkers start at the back, walkers to the left so runners can pass. Of course people just wanna be rude and do their own thing and I did have walkers in front of me at the start. And not veering to the left to walk.

There was a blue heeler type of cattle dog. (I don't know dog breeds well) and he was not behaved at all. Before the race start, he was barking and dragging his owner wanting to attack other dogs. The girl who ran with him started near a well behaved pit bull or boxer type of dog. She was in front of a man with his dog. And the dog was determined to attack this other dog. It was obnoxious and dangerous. The man decided to get in front of the girl and accidentally bumped into a man standing on the side of the start. A few choice words were made and the first 1/4 mile was non-stop barking. I'm sure that girl had to run a bit faster then she wanted at the start since the dog was dragging her to catch up to the man with the other dog. It's like, gosh, if your dog isn't well behaved, you have to get it training before you can take it and run at races. It's just not safe for anyone if the dog is trying to attack other dogs. There was a St. Bernard puppy that was so well mannered and lovable, there is flat out no excuse to not have a well behaved dog.


The race went through residential streets and the downtown area - which is looking really nice with a new remodeling process and revitalization taking place. Like I said, there were plenty of race volunteers at all the intersections. I did have to stop twice for traffic to be flagged by, but its not like I was really running for it to be an annoyance to my pace.  At mile 2, the 10K leader had his police escort fly by us. I was chatting with a couple of ladies at this time about how impressive his 10K time is our 5K goal time. He finished in just over 34 minutes. Such a speedy dude and so inspirational to watch.

I know my photos taken of this race are not the best or descriptive. But, here's a few along the course.

I did mention the race was really, really well marked with these yellow arrows. 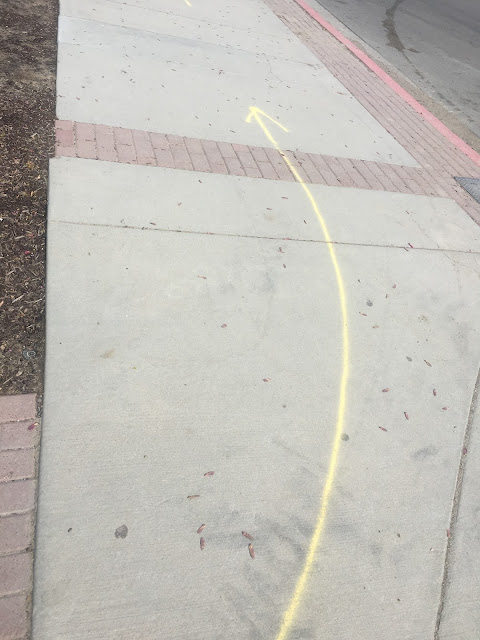 The last half mile was near the city park. 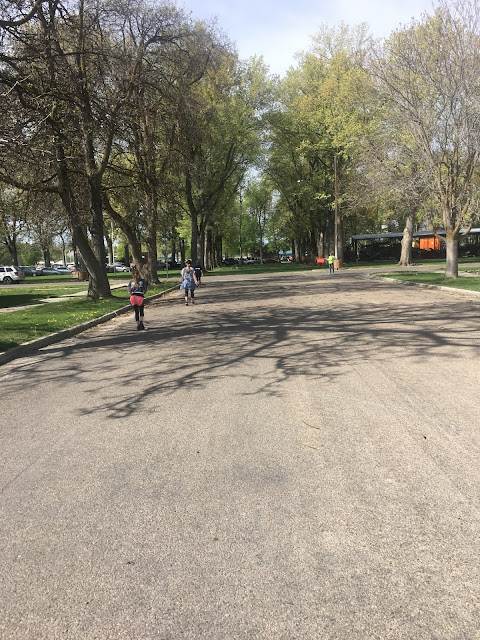 I don't know if you can see in the distance, but there was a classic car show going on too. 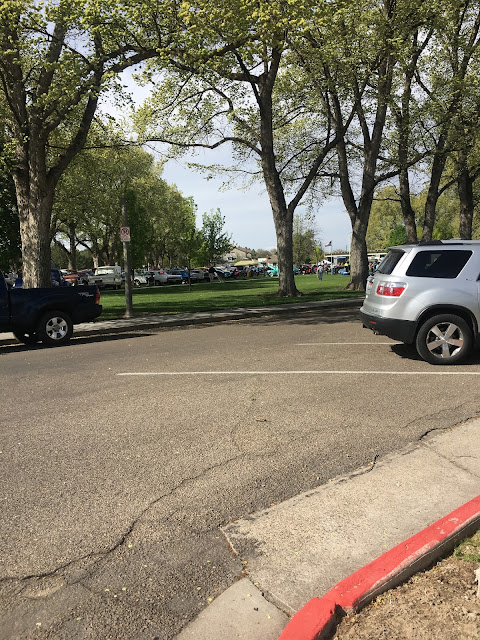 Post race, it was a feast! I wanted to get back home and take a shower, and since I didn't win any awards, I just left instead of sitting and eating by myself. It was not easy hauling this back to the car all by my lonesome. I needed another couple hands. There was hot baked potatoes and chili with cheese and onions for toppings. Sour cream and your choice of butter. Chocolate milk, bottles of water and full sized bottles of Powerade. There were apples and bananas, string cheese and Quaker Chewy bars. You did not leave the race afterwards hungry or dehydrated! 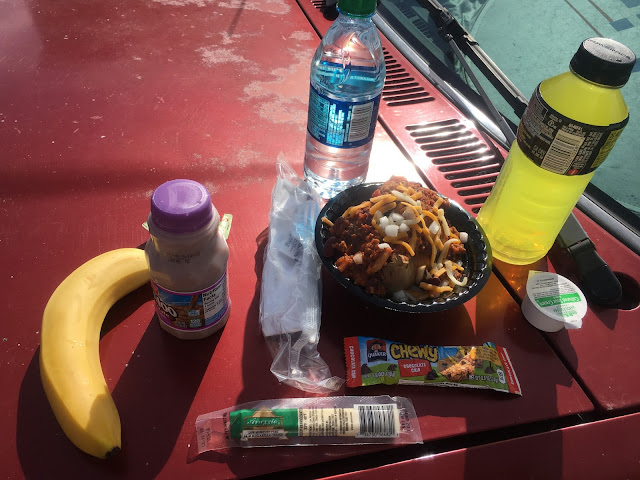 Even the swag bag was full of useful swag. The race shirt, bandaids, a little bottle of sun screen, some pens, a note pad, coupons. Along with a coupon for a free latte or hot chocolate and a free YMCA day pass. Everything was useful.

All in all, while not my best trot mentally, it was worth the long drive for me. I will keep this race on my radar for 2019!

How is your weekend going? Any fun runs planned? Did you race or have anything exciting to share? I get the privilege of joining a new age group soon. I can't wait to tell you about it soon!