May 28, 2018
The 19th of May was the 40th annual YMCA Idaho Potato Run. I have participated in this race for the last few years. I think this year was the 5th time.


Last year, due to the high water and the river flooding, they had to change the race course. They kept it again this year, and I have to say that I actually prefer it. There is plenty of parking in the local business parking lots and you really get to see all the fast marathon runners finish before the 10Ks and 5Ks start with the staggered race start times.

I woke up early as there was some yard sales we wanted to hit. With a 10am race start, I felt OK enough to wake up at 6am and run around and hit some sales. It was totally worth it even though I had Krispy Kreme and McDonald's for brekky. Not the most desirable pre-run meal but oh well. Things happen. We found some really good deals (items to flip for profit) and our truck was full by 8:30am. A very successful yard sale hunt!

The half marathoners and marathoners started early in the morning from a different location. The 5 and 10Kers started at the race finish together. I did the 5K and I felt like there was a lot more participants this year then last. I think it took almost a minute after the gun sounded to walk across the starting line mat. Like I said, I think there were more participants. Either that, there were an awful amount of walkers in front of me.


There was an awful amount of congestion at the Parkcenter bridge. Like, totally awful.

It was kinda friggin' stupid, but someone didn't want to splash in the puddle that was at the end of the bridge. So we went from a very congested walk / slow jog (jog because there was NO WAY you could run with the huge amount of runners in such a small, tight sidewalk space) to a complete stop, to a very slow walk as we wondered WTF?!?! Oh. Its a puddle and some people didn't want to walk in it so they blocked up everyone else behind them so they could go around it. We really need to run along the road across the bridge because this is way too congested, it really throws off the pace. We are running along the road before we get to the bridge, we should run along the road over the bridge too.

Anyways, a fairly unexciting run the rest of the way. The typical things happened. You know - walkers starting at the front, and stopping to walk without moving to the right. Walking and taking up the WHOLE path. The fairly typical race annoyances.

But there were plenty of volunteers with directions and traffic control. The route was well marked with chalk. And since it was the same route as last year, pretty easy to follow. (I like being familiar with the race route.) 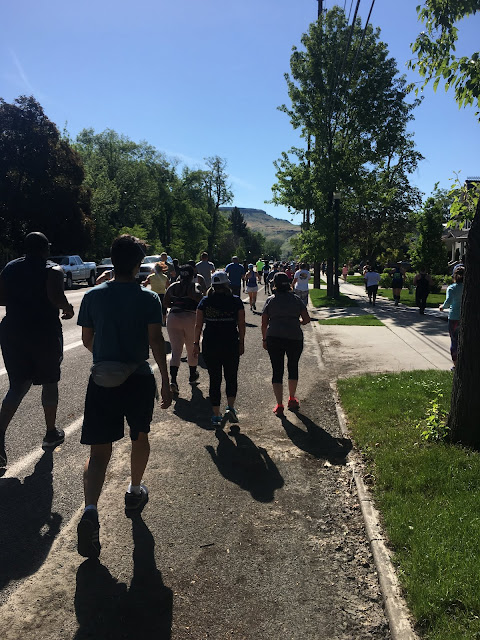 I wasn't in this race to place in AG or whateves. I just wanted to get out and check off another Team Beef race for myself.

The weather was warm and I am glad I brought sunscreen with me. At packet pickup the evening before, I got a little burnt from waiting in line. Officially summer!

Post race, everyone gets a medal, finisher shirt, water, and a loaded baked potato. Chobani was available with yogurts, and there was a chocolate milk booth. There were a few other booths to visit also. I don't recall what they were. If it didn't have food or drinks, I didn't pay attention ;-)

Personal notes from this run, its time to switch out my thik Pearl Izumi shoes for more cushy Hokas or Altras again. My legs were getting tired from not having the bounce of the cushy shoes.

Anyways, that was it. A short and sweet race review.

How was your last race? Did you remember sunscreen?