October 29, 2018
Sunday the 28th of October, I got to participate (run/walk, I guess?) in the Onward Shay Marathon. I did the 5K. I could walk the half or full marathon, but I know my running place since I really have not been making too much of an effort to work out with a lot of annoying life stuff right now.

This is LAST YEARS Garmin route and my sloggy time.

This is this years Garmin route and time.

I wore a Team Beef windbreaker jacket I have never wore before. I thought that it was so thin and had vent flaps, I would have been ok at the 48 degree race start. Ugh, no. I was so warm and sweaty half way through it was embarrassing. My hair was soaked and whatever sweat was inside of the jacket, just stayed inside. My coat looked like it just came out of the washer. It will be a good jacket in 30 degrees or rainy and snow, but not for erfect temp trotting.

I guess nothing new on race day. My bad. Good thing that I am not speedy and attempting a PR.

So, anyways. What I liked about this race compared to last years race is that they started in waves. It made for WAY less congestion on the greenbelt. Every minute for the Full and Half marathon was a wave. It was something that I wish every race would do. That made for an easier start for everyone who just happened to be behind a walker, felt a little extra speedy at the start, and needed to break from the pack.

Last year the race went thought the residential North End and past the busy main intersections. I did like the scenery of the residential, but the greenbelt is safer for everyone.

And before I get a little further from this pic - Toyota is the Official Pace Car for the race - so the new sporty Avalon and TRD was available to check out before and after the race. Yes, Toyota comped my entry for the race as an official FYI.


The other half started out with me. He was playing PokemonGo so much his battery died while I was waiting for the post-race meal.


The course was very well marked as with the 5K, we had a couple of other turns where the longer distances didn't. Especially at the end. There were plenty of volunteers who did direct, but as I trotted by, they were fairly unenthusiastic. But they did their job. I never took any wrong turns and made it to the finish line safely. 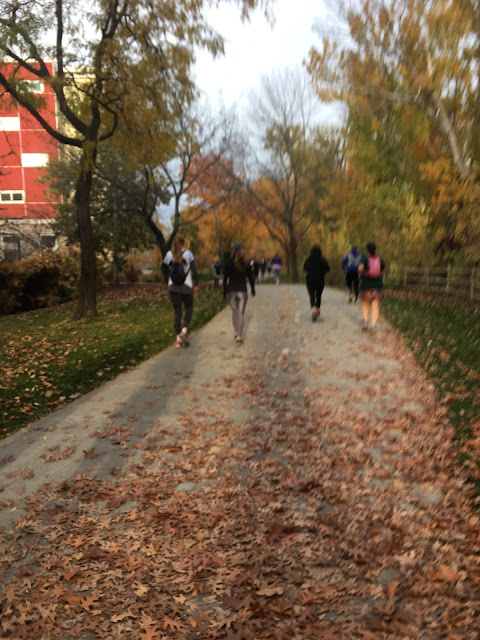 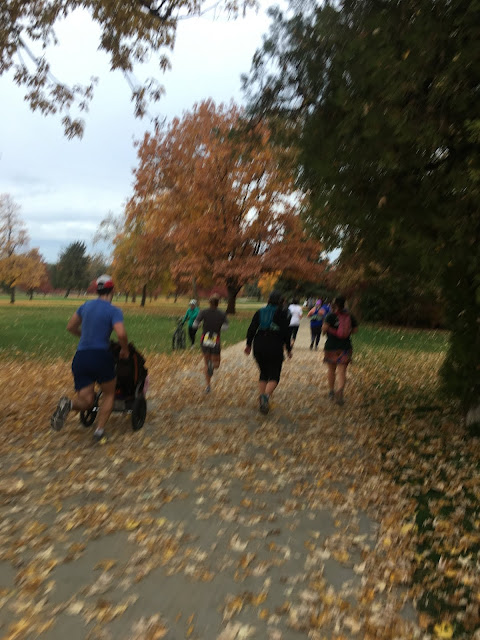 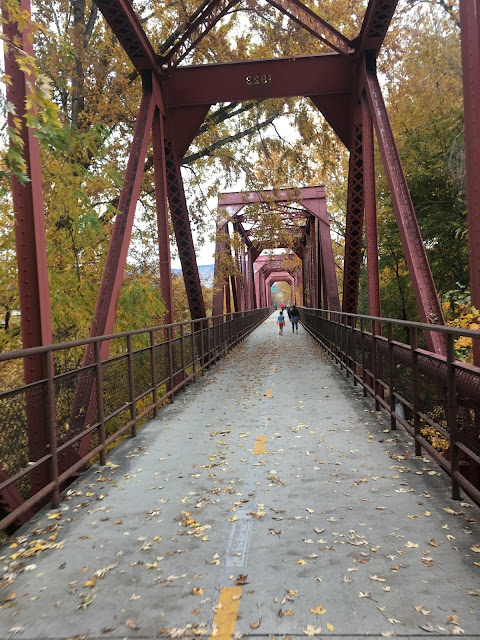 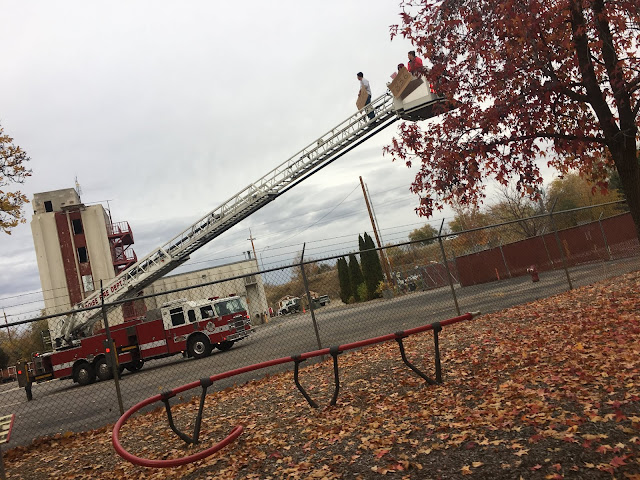 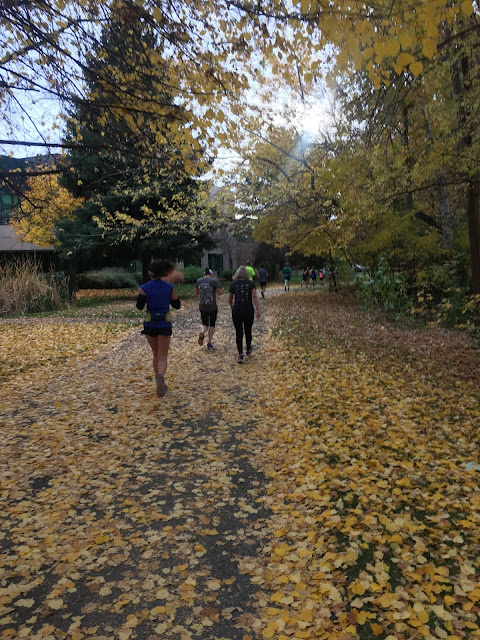 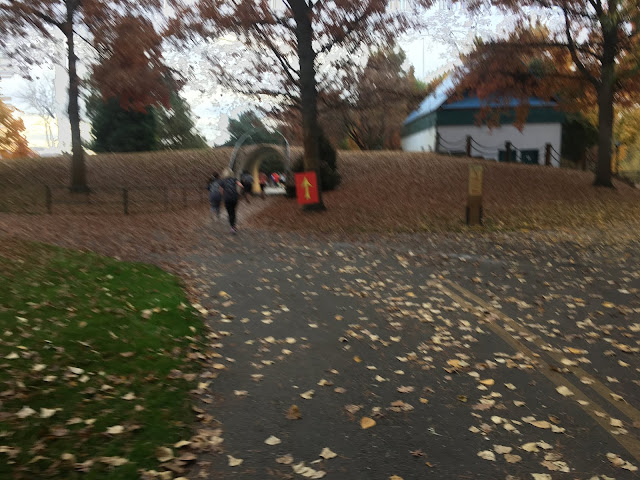 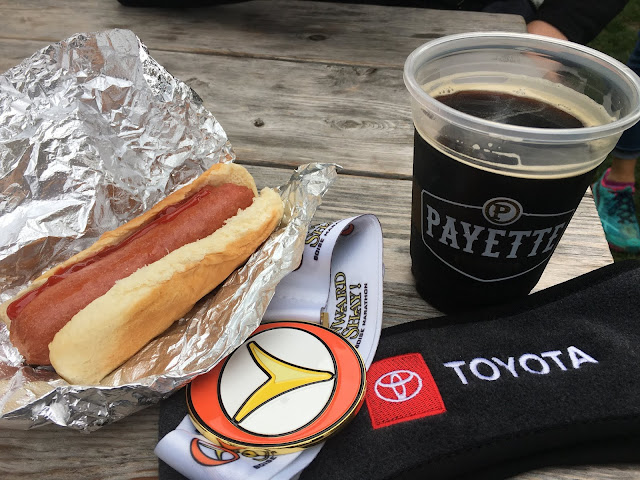 The new Toyota's are nice. We proudly have 500,000 on our 1989 Toyota truck and a newer TRD would be welcomed and I would be pretty darn happy with a new Camry. (Thanks, Toyota!)

This race weather was just perfect and my poor decision to wear what I did was on me. It did make me a bit slower as I was too hot and sweaty.

The greenbelt is lovely this time of year. Spring and Fall on the greenbelt is just THE BEST! I will miss looking at all the residential areas decorated for Halloween and the homeowners cheering us on from their yards. I understand the need to change the route this year and I am pretty much OK with it.

The race route was shorter. My Garmin said we only did 2.93 miles. I guess that makes up for the long course of 3.6 miles LAST YEAR.

The race starting in waves was the biggest YAY from me. The 5K was small enough that it didn't matter, but I know it had to have made a difference in the longer distances.

At the end of the race, I really, really, really did not like to have to wait for the "post-race-meal" and the beer. It was almost a half hour wait for the beer and even longer for a hot dog. I waited cold and wet for nearly an hour for someone to bring a standard cooler of foil wrapped hot dogs (See weenie above). The volunteers at the snack tables (which did have oranges, Cuties, cookies, bananas and water) were telling everyone hamburgers will be on their way but I gave up waiting and grabbed one of the last hot dogs. The hot dogs were good as it wasn't a tiny wiener but not sure if someone dropped the ball on being prepared for the finishers at the end of what. My Payette Pistolero Porter was cold and perfectly poured. Even if I did have to wait a half an hour for it post-race.

I would gladly give this race another go next year.

Did you run or race this weekend? How did you do?