November 07, 2013
I finally got in a very slow and sloggy run. I have not ran since Sunday, and it makes me sad working 60 hour weeks. I did include some crosswalks and I was picking up cans for recycling and such during the time below. But I felt SO sloooow in my leg turnover.

I ate a Baja Fresh steak & shrimp burrito for dinner before my run. That thing was gone in a flash. I was so hungry. I had a bagel with PB & banana for brekky and the best flavor of yogurt for lunch. You are welcome to figure out my calories for me. I'm too lazy/tired/busy to type it into DailyPlate.

Yea. I can eat anything before a run and even during with the exception of caffeine in my gels. Not much upsets my gut where I am looking at bushes to see if they provide enough bun cover.  But I am now sure burritos are one thing that make running quite unpleasant. I really felt like I had a bun in the oven tonight.

And after the burrito, I think I know what it feels like to run while preggy. I had a burrito baby in me. ugh. I can NOT imagine running at 9 months though! 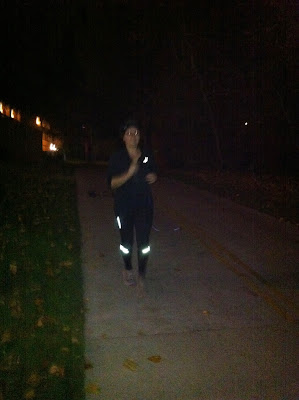 I am thankful for black clothing items and the time change making it dark at 6:30pm. Because girlfriend was a bloated, uncomfortable beast.

How are you doing with the time change? What is one thing that you can not eat before a run?

FYI Boise peeps. There are homeless under the Veterans bridge at night and someone has a sleeping bag all set up at the new Pleasanton river park porto changing area.